If you follow Sarah in Illinois on Instagram, you might have seen that some new feathered ladies joined her flock. Sarah seems to be on a quest to have all the chickens–or all the eggs in every colour possible. Read on to meet her new hens.

Back in June, my cousin Emma sent me a message with a picture of her new chicks. 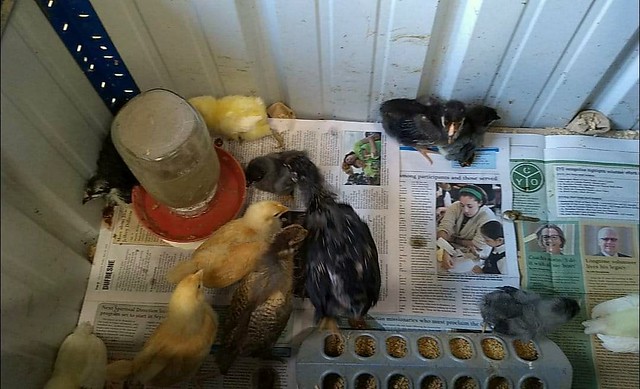 In the message she said that 3 of them were Leghorns if I wanted them. I had mentioned to her over the last several months that I wanted a few Leghorns, but I didn’t want to raise them from chicks. Since she was raising some for herself she said adding a couple Leghorns wasn’t a big deal. 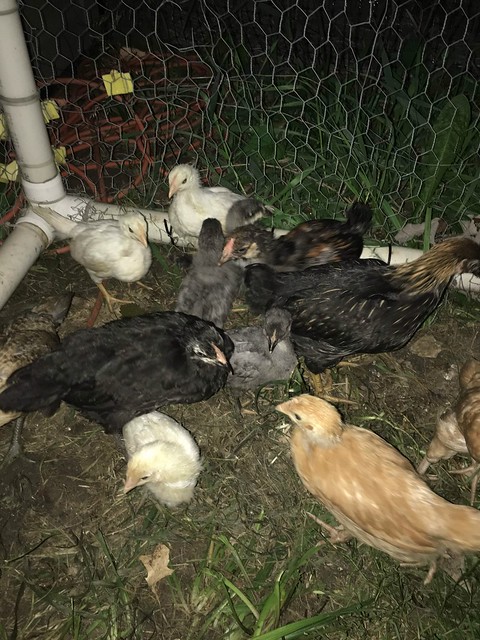 She sent me updates occasionally. 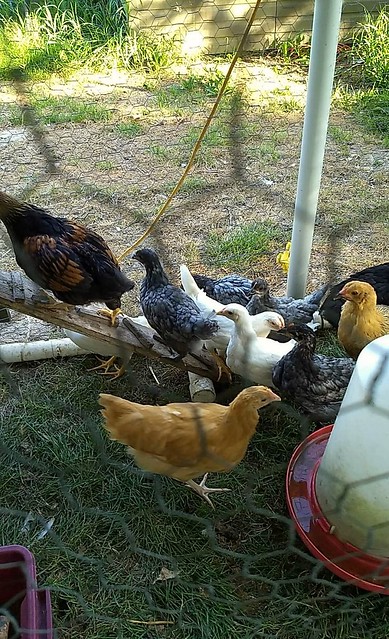 And two weeks ago I went to pick them up. 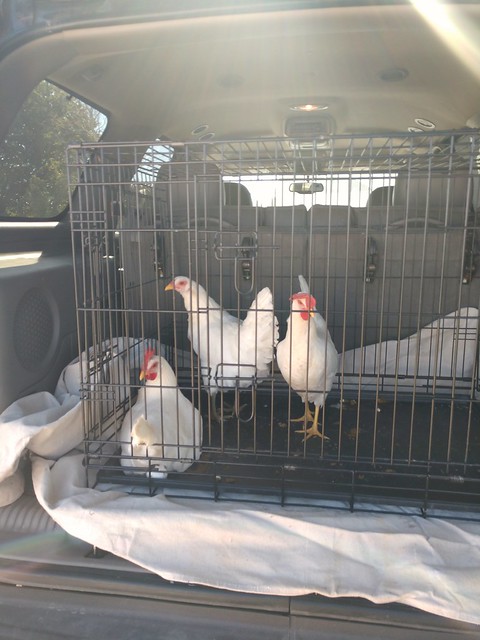 The 45 minute drive home was either very stressful or very relaxing because one of them laid an egg in the dog crate!

I had everything planned out for the integration into the flock. I divided the run so that the chickens could see and smell each other but not hurt each other. 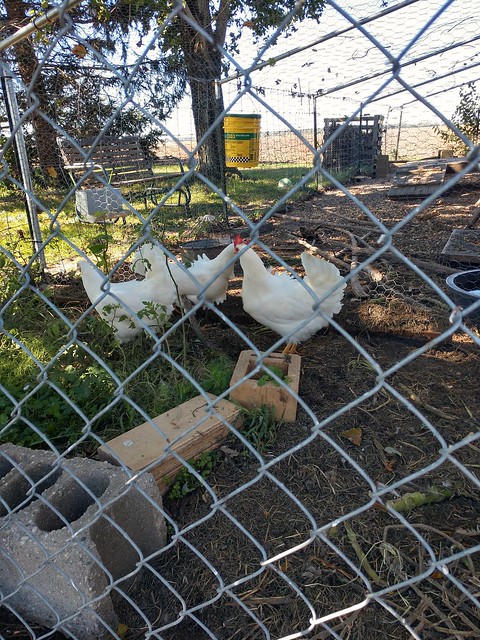 Then I planned to put them in the coop inside the dog crate every evening.

Well I didn’t make the divider in the run tall enough because Blitz ran towards the chickens and scared one over the divider.

I could have immediately grabbed it and put it back in the separate section, but I decided to wait to see how the chickens would react. So what did they do? All seven chickens ran into the coop and hid from this new smaller chicken. 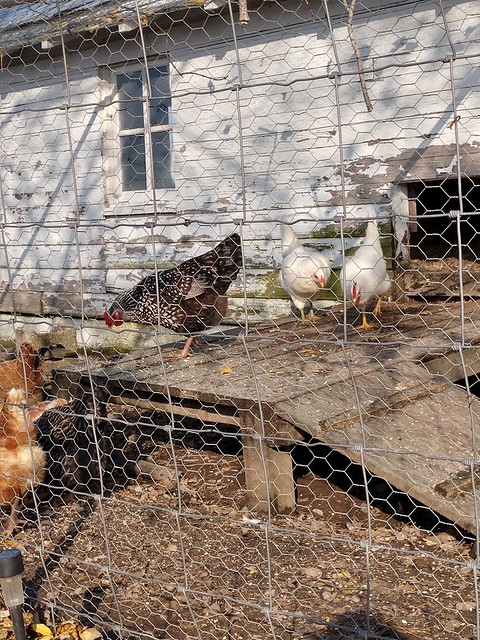 I had a couple days vacation, so I made a point to go out several times a day to make sure that none of the chickens was injured.

The first night the new chickens roosted up on the dog crate opposite the roost. 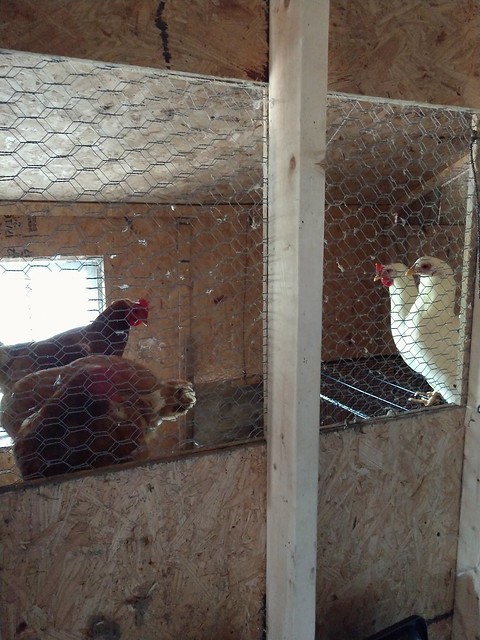 After a few days they all started roosting together. 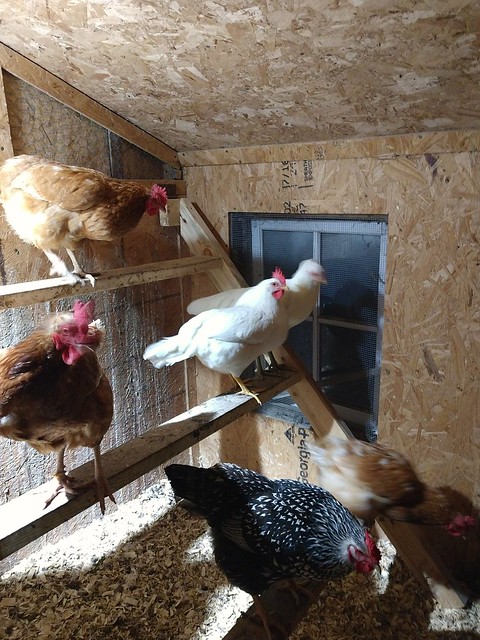 I can’t say that after two weeks all of the chickens are “friends,” but honestly the integration has gone really smoothly. I do occasionally see one chicken picking on another, but the new chickens are very fast so they spend a lot of time playing hide and seek.

And it turns out, one of the chickens is not a Leghorn. It looks like it might be an Easter Egger! Instead of yellow legs like Leghorns have: 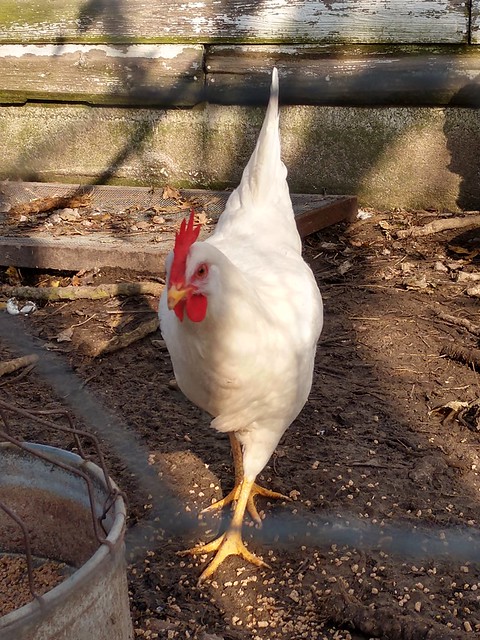 It has grayish-green legs. 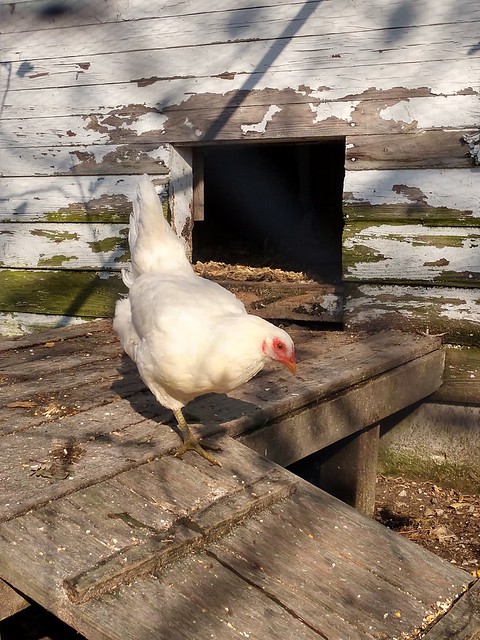 What does this mean? Well, to me absolutely nothing. I just think of it as a bonus. Easter Eggers can actually lay almost any color egg depending on what they have been bred with, so for me it is like waiting for Christmas morning to see what happens. The two Leghorns have been laying tiny little pure white eggs. As they get older the eggs will get bigger. 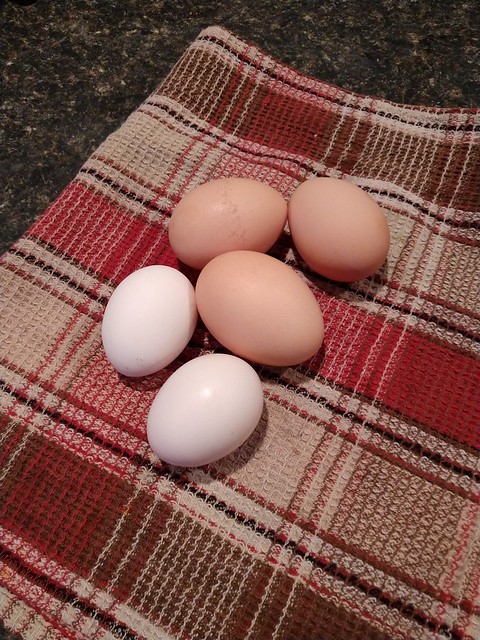 Two years ago I thought I would like to raise chickens and started with 4. I now have 10 and I can’t say that I’m done. I’m thinking next I will add Araucana–they lay blue eggs! 😉

Chickens seem to work out very well for you, Sarah. I’m glad to hear the birds integrated so smoothly. It’s great to see how much you enjoy your flock and their eggs. I admit, I love the idea of having Araucanas someday, so I say go for it!