Now I don’t claim to be any great housekeeper, and I admit that while we’re under renovations I let the cleaning routine slip a bit. However, Sunday morning I was a bit surprised to see a very large dust bunny in the opening of the bedroom doorway. Especially because I had run the shop-vac around the main floor just the day before.

I was even more surprised when upon closer inspection I discovered that the dust bunny was actually a dust toad–and it was alive.

Yup. Forget mice, although we have had three of those so far. When it comes to animals in the house, Matt and I start with snakes and then go on to amphibians.

With the help of a piece of cardboard and a tupperware container, Mr. Toad was relocated to a more hospitable habitat outside in the garden. 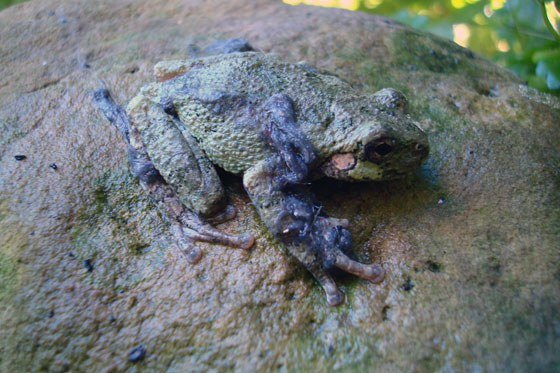 I don’t know where he’d been on his tour of the house, but he was caked in dust, so I hosed him off and then gave him some hands-on attention to remove a few remaining clumps.

He seemed pretty exhausted from his escapade, so eventually he gathered his strength to crawl into the leaves to recover.

7 thoughts on “Hopping at the homestead”