At the top of Matt’s list of animals he most wants to see at the farm is wild turkeys. Well, we still haven’t seen any actual birds on our property, but over the Christmas holidays we found definitive proof that turkeys come to visit.

(The larger tracks walking diagonally in from the left side of the picture are Matt-tracks).

In the deep snow, I have to look pretty closely to identify the tracks as turkey. They walk one foot in front of the other, and, if they plant their foot properly, I’m sometimes able to pick out their distinctive three-toed print.

According to the tracks, 11 birds came through our farm. In some spots, you can see where their wings dragged as they were walking along.

While lefty has to deal with droopy wing syndrome, the guy to her right obviously has his own problems. My diagnosis is likely too much Christmas cheer.

Back in the marsh, where the ice was covered with only a thin dusting of snow, the tracks were unmistakably avian. 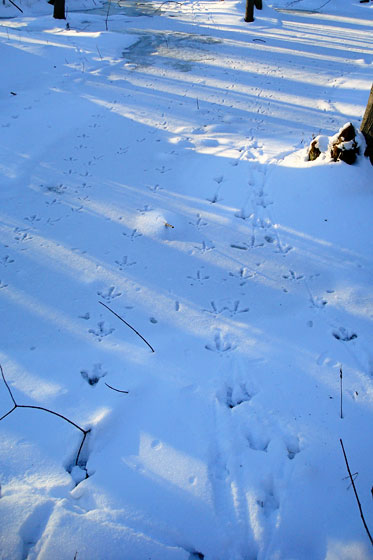 I wish I had thought to put something beside the tracks to show their scale. These are some big birds.

Since the thaw last weekend, we no longer have snow to help us with tracking. Matt’s fingers are crossed that the turkeys weren’t just passing through and instead are ready to become permanent residents. We’ll keep our eyes and ears open for signs.