Our farm is in a very marshy area. On the roads around the farm, I often encounter turtles on the move from one marsh to another–usually on the opposite side of the road. 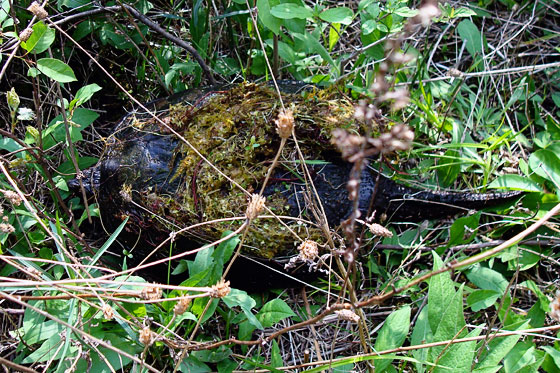 Fortunately, most drivers seem to be pretty conscientious about doing what they can to protect turtles (I saw one car yesterday with an “I brake for turtles” bumper sticker). So it’s not unusual to see cars pulled over or stopped a safe distance from a crossing turtle.

Most times though people don’t seem to know what to do with the turtles. They’re obviously not the fastest creatures in the world, so it’s usually necessary to help the turtles on their way.

Here’s my technique to move a turtle along.

First the basics: safely pull over your car making sure to get as far out of traffic as possible. If you have to enter the road, look both ways and make sure you’re going to be safe.

Now the more complicated step: picking up the turtle.

Most of the turtles I encounter are large snapping turtles. I have a childhood paranoia from swimming at my grandparents’ cottage about being bitten by a snapping turtle–not that I’ve ever been bitten. It’s just a childhood hangup.

However, I’ve learned it’s very easy to pick up a turtle without endangering yourself or the turtle.

My technique is to grab the turtle with both hands on the rear half of the shell. Get a firm grip. If the turtle’s on the small side, you might be able to grab it with one hand, but it’s safer to use two hands. The turtle might squirm a little bit or might be heavier than you expect.

Now lift. Her head will maybe turn around, but she won’t be able to reach you if you’re on the back half of her shell.

Make sure to hold the turtle away from you. It will likely be slimy and wet. And the last time I moved a turtle, I swear it tried to pee on me.

Now carry the turtle across the road and gently set it as far from the edge of the road as possible.

Wipe your hands (the grass will probably work if you don’t happen to have tissues in the car) and go on your way.

Have you ever helped a turtle cross the road? What’s your technique? What animals do you encounter around your home?

8 thoughts on “How to help a turtle cross the road”