Here is the first photo of the kittens.

Not quite the fluffballs you were expecting?

Let’s try that again. Here’s the second photo of the kittens. 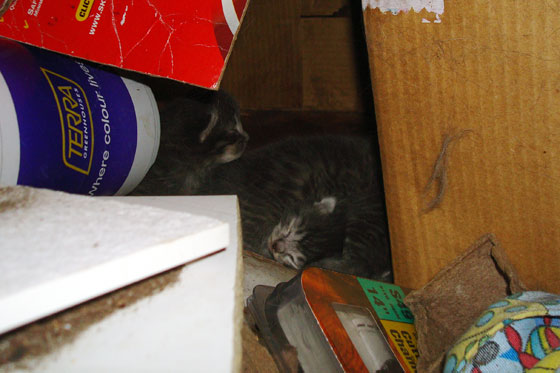 We haven’t cleaned out the loft in the drive shed yet (don’t judge), and, when it came time for Ralph to have her babies, this is the spot she chose. It’s actually a pretty good location. High off the ground so no animals can get them. Sheltered in a cardboard box. Well hidden behind all kinds of garbage. I’m amazed Matt was able to figure out where they were.

Sometime last weekend, Ralph decided her babies were ready for a new home. Again, Matt was the one who discovered where that was.

Matt pets the kittens for the first time

The kittens are now in a stall in the basement of the barn. For the first time, we’re able to see them clearly, so we can confirm we have four kittens. They’re two weeks old, so their eyes are starting to open, but they’re not very mobile yet. 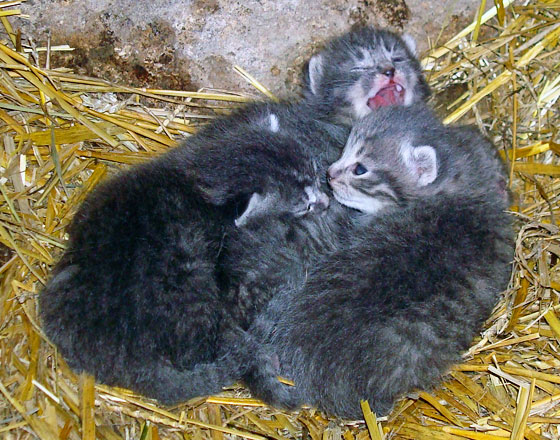 I think someone’s getting hungry

Six weeks to go and they’ll be ready for adoption. Let me know in the comments if you want a fluffball of your very own.

Every day at the farm is full of special, simple moments. I do not take this life for granted. Especially when the world feels like such a heavy place. I see extremists with power imposing their vision on society–regardless of the beliefs citizens hold. People who hold power are using old and extremely narrow thinking to make decisions for today.
Last week I read Pastoral Song by James Rebanks @herdyshepherd1. So much of what he wrote connected with me. But this passage hit hard, and I want to share it here on Earth Day.
In the future when I talk to Ellie about feeling the onset of climate change, I think I will start with the winds. The winds are so strong and fierce. I feel like the winds are harbingers of more harshness to come.
A decade. We’ve been here at the farm for a decade.
Welcome to our family Cigo.
Saturday was a beautiful, sunny, cold day. We spent most of it at the pond immersed in the magic of the farm.