As you saw yesterday, work on the basement continues. In the meantime, I’m going back a few weeks to talk about some of the problems we encountered with the electrical. 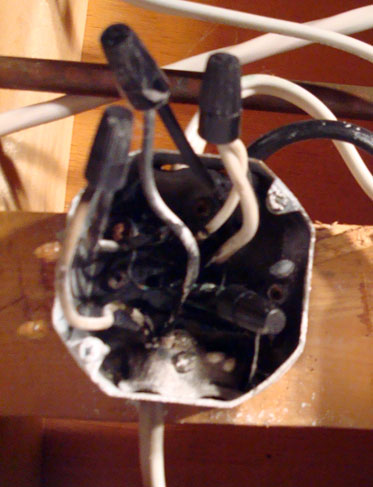 Fried junction box in the basement ceiling. In case you were wondering, no, the inside should not be black like that.

We ended up discovering a total of 10 junction boxes in the basement ceiling, hidden behind the drywall. This is a big no-no. Junction boxes themselves are okay. But covering them over with drywall is not. You’re supposed to put a cover on them so that they are accessible.

“I found another one.”
“Seriously? Crap!”
“Do you want to just pull the whole ceiling down?”
“We probably should. Who knows how many there are up there.”

One of my goals in hiring a professional electrician was to eliminate as many junction boxes as possible, because I didn’t want the covers polka-dotting our nice new ceiling. In the end, our electrician was able to get rid of all but two–much better than I’d hoped for.

The other unsettling moment during demo was when we’d open a wall or part of the ceiling and find a loose wire. The ends were usually cut. They weren’t capped or taped at all, and we had no idea where they went and whether or not they were live.

This was the moment when Matt would reach for his tester and point it at the offending wire. If the tester chirped, that meant the wire was live. It turned out that most of the wires were dead, completely disconnected at both ends. No one had ever bothered to remove them, so they just sat there behind the drywall waiting to scare future renovators.

Matt made it his mission to eliminate all of this useless wiring, and he spent a lot of time tracing wires through the ceiling and along the walls so that he could pull them out. 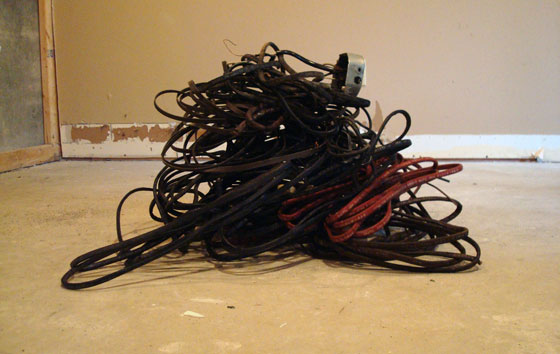 Pile of some of the old wires Matt pulled out in the basement.

We did as much of the wiring work ourselves as we could, but having the help of a skilled professional was absolutely necessary for fixing all of the problems. Electrical is not always straight-forward, and it can be dangerous if it’s not right.

I’m all about DIY, but only if I know what I’m doing. Thanks to our electrician, all of the problems have been fixed, the panel is organized and labelled, circuits have been tidied up and new outlets and lights have been added where we wanted them. Most important of all it’s done right and it’s safe.

This beautiful fall scene is brought to you by eight months of cleaning up the farm junk pile. The junk pile is still there. It's just a lot smaller and tucked closer to the trees. Oh, and there's a new compost bin too (swipe to see). All the details on how I built the bin and a shot of the junk pile before are on the blog (link in my bio).
The treehouse playground is done. It is as fun and our daughter loves it as much as I hoped. All the details are on the blog this week (link in my profile).
Four years of hay harvests with our girl.
Wanna come play in our treehouse? It's not done yet, but we're having a lot of fun building a treehouse playground. There's a slide, tire ladder and much more to come (including a railing). Swipe to see the very sophisticated artist’s rendering. More details are on the blog (link in my bio).
PSA. Gypsy moths are hatching this month. This invasive species can cause severe damage to trees. Now is the time to remove gypsy moth eggs from your trees. The light coloured egg masses are easy to spot (swipe to see). Scrape them off carefully and drop the eggs into a bucket of hot water mixed with bleach. If the eggs have already hatched, sticky tape around the bottom of the tree can catch caterpillars as they go up and down.
"I am not the busyness of my thoughts." This quote from @richardwagamese connected with me as soon as I read it.