What do you think of our new colour scheme in the basement?

Matt was hoping for blue. I’d say he got his wish.

Last week, we had spray foam insulation applied to all of the exterior walls.

As you’ll recall, the original plans for the basement reno were mostly cosmetic (replace carpet, remove paneling, relocate cabinetry, leave all the drywall in place and just patch and paint). Simple, easy, quick!

However, we’ve had a few surprises in the form of inadequate insulation and improper wiring. Our solution was to remove the drywall and the existing R7 insulation from all of the exterior walls and start fresh. 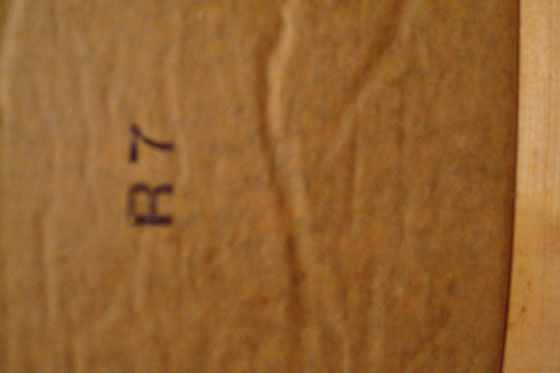 The old insulation was actually stamped R7. I don’t think I’d admit it if I was that inadequate.

However, we couldn’t just simply put the new insulation into the old walls because all of the studs were laid flat on the concrete. This meant we only had 1 1/2 inches for insulation. We had to fur out all of the existing studs with new 2x4s.

We screwed new 2x4s onto the existing studs.

The count was close to 100 studs for the whole basement. Each one had to be plumbed (make sure it’s perfectly vertical) and then toenailed (screwed on an angle) with three inch screws to the old studs. It took two people to do each stud (one to hold and one to screw), so this stage has taken us a little while to complete. Matt and I found it took us about two hours to do a wall.

It would have been easier to put the new studs flat onto the old studs, but we wanted the higher R factor that additional depth allowed us. We ended up with 5 inches of space and we had the option of R20 or R27 for the insulation. R20 application meant we’d have 3 1/4 inches of foam and R27 would be 4 1/2 inches. We chose to go with R20 because there was nearly a $1,000 price difference for just 7 more R factors, which wasn’t worth it for us. R20 is still a really good rating.

I’ve never done spray foam before (and to be clear we couldn’t find a DIY option for spray foam, so we hired an insulation contractor to do the work for us), but we chose this option over the traditional batts for a couple of reasons:

Spray foam is tar paper, insulation and vapor barrier all in one. Plus it’s more rodent resistant, which is comforting given our discoveries.

The spray foam covers the wall space between each stud as well as the joist headers at the top of the walls. In the main room and long room the ceilings are all open so the sprayers had easy access (click here if you need a refresher on the floor plan for the basement). In the office we left the ceiling in place, so Matt cut back about 12 inches of drywall off the ceiling on the two exterior walls so that the sprayers would be able to access the joist headers and we’d have a good seal all the way around. 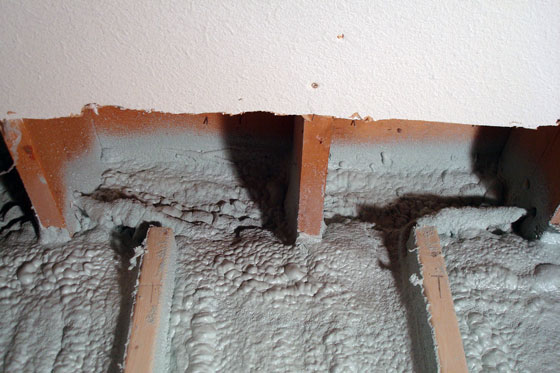 To prepare for the spray foam we made sure all of the electrical and plumbing work that we wanted to do was completed in advance. Spray foam fills all of the nooks and crannies and hardens very quickly. It’s great for efficiency, but you can’t really change your mind and say, “Oh I really wish that plug was over here” after it’s all done. 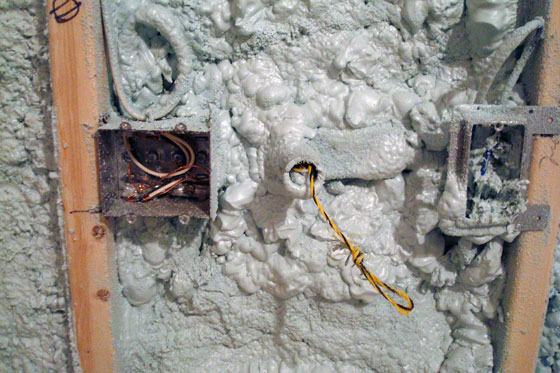 This is the corner in Matt’s office where the desk is going to go. From left to right we have a double box for electrical outlets, a plastic conduit that will eventually house the internet wire (we’ll use the string to pull the wire through the pipe) and a phone jack.

The spray foam crew took a full day to do the whole basement. While the spray is being applied, it is toxic, so the crew wore respirators and my Dad (who was on-site supervising) couldn’t stay in the house. When we got home from work that night there was a slight odor, but we opened the windows and it dissipated quickly.

Insulation is a major step in putting the basement back together. As much as we love the teal, we’re anxious to move on to drywall… Or maybe just anxious about drywall. This next stage is going to be a biggie. We’ll keep you posted on how we make out!

5 thoughts on “Warm and toasty… and teal?”