We’ve had a bit of an odor recently over at 129 acres, and it’s not from the manure wafting from neighbouring farms. No, this smell was coming from inside the house.

At first it was just a slight malodorous scent of sulfur. It quickly became a rank rotten eggs with a side of green onion disgusting reeking stench.

This fetid fragrance materialized every single time we ran any hot water. The two days last week when I wore my hair in a ponytail? Yep, that was because I couldn’t bear to stand in the shower long enough to wash my hair.

Thanks to Katy at Turtle House for sharing her experience with this issue, I was able to take a guess as to the reason behind the stink:

Katy’s explanation: Turns out that hot water heaters contain an element called a sacrificial anode, which is typically made of magnesium or aluminum and keeps the hot water heater from rusting (and is also a terrific name for a rock band). However, it also somehow provides excellent breeding conditions for a harmless but stank-producing species of bacteria that releases hydrogen sulfide gas as a waste product. 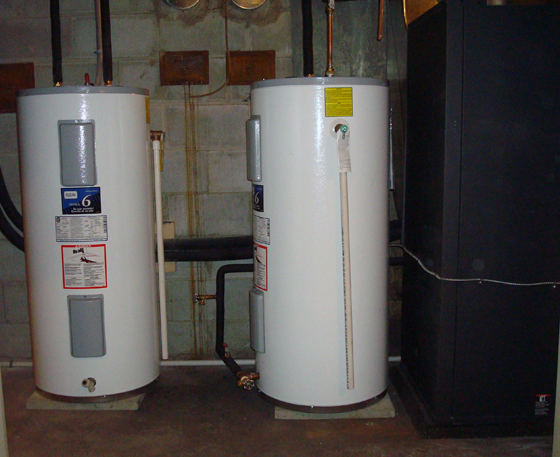 I called our geothermal folks, as they installed the hot water tanks in the first place, and pleaded for help. They gave us a few options.

We chose to go with option #3. We’ll take the risk of the tank rusting over replacing our three-month-old hot water tanks or installing a new anode that might be just as attractive to these stinky little bacteria.

Removing the anodes took about an hour.

Given that our tanks are pretty new, I was surprised by the amount of build-up on the anodes. I’m not sure whether it’s just minerals from the water, salt from the softener or actual corrosion. The one anode is coated in a grainy white sand. The other is actually pitted pretty substantially. I’m not sure what this means for the future of our anode-less hot water tanks.

On the positive side of things, our water is now odor free. We turned on the tap in the bathroom to drain the tank and went for a walk outside to avoid the stench. After giving the tank some time to refill and reheat (and lighting a vanilla candle to cover the rest of the smell), I took a wonderful, warm, unscented shower. And yes, I even washed my hair.