Upon moving to the farm, we made an agreement: no animals for the first year, except hopefully a dog.

Then came Ralph and Bert. Then Ralph had kittens. And the dog became “maybe next year.”

There’s no hard feeling though. These four fluff balls made our first spring on the farm pretty special.

Trying to get four kittens to hold still and look at the camera is a bit of a challenge.

But now it’s time for them to leave Matt’s and my forever home for homes of their own.

So farewell Rex. Farewell Gypsy and June. Enjoy your new families. Make lots of new friends. Enjoy your life of leisure as pampered pets rather than hard-working farm cats. We’ll take care of mom and tug on her tail every so often for you.

Watch out, Ralph! Rex is coming for your tail!

For those mathemeticians out there who are counting four kittens minus Rex, Gypsy and June and finding things aren’t quite adding up, your calculations are correct.

She was our favourite all along. While three of the kittens look pretty much identical, she stood out. She had golden eyes while the others had blue. She was shy and timid and stuck close to mom while the other three were always looking for attention from the humans. Her head was slightly rounder and larger… which led to the unfortunate name we’ve been calling her for the past 10 weeks… Big Head. We’re trying to rename her, but it’s hard to break the habit. Matt came up with the new label of Easter… as in Easter Island. We’re terrible parents. 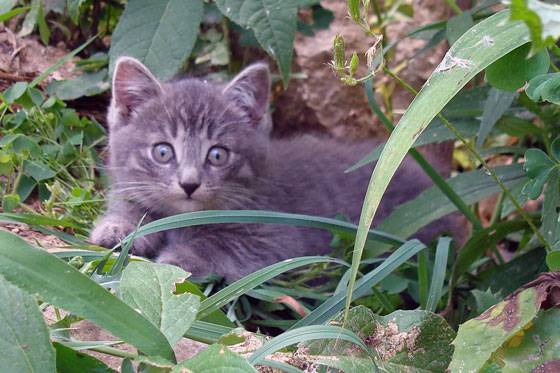 Can you blame us? She always has this weird petrified look on her face.

Easter is showing early signs of being an excellent huntress like her mom. She spent a lot of time stalking her brother and sisters and has perfected her pouncing technique on the tufts of grass in front of the barn. We think she’ll be a good addition to the farm and to our family.

So no animals for the first year except for a cat. That’s okay by me.

4 thoughts on “Farewell kittens… or maybe not?”