No, renovation fatigue hasn’t turned my brain to mush and I’m not high on drywall dust and paint fumes. I do actually know what time of year it is. (Groundhog Day is just around the corner, right?)

The title of this post is in honour of our newest family member, Easter the kitten. Remember her?

Today is Easter’s five month birthday, and she’s starting to cross the boundary between kitten and cat.

She hasn’t learned her lesson about curiosity yet and likes to investigate everything–including the camera.

She’s learning to hunt, although her prey predominantly has six legs. She eats grasshoppers, wings and all. We’re hoping she’ll move up the food chain soon.

She has caught one mouse, although I think that was only because he was stunned and petrified after Wiley and I unearthed his home, and he made it very easy for her. 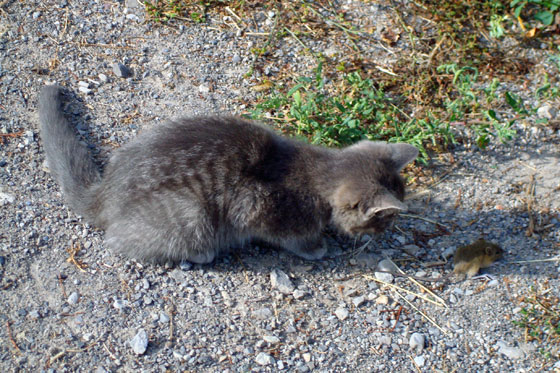 She chased a vole this weekend, but, after running in circles around the driveway a few times, she was frightened into giving up the chase when the vole turned and squeaked at her.

It was a very embarrassing scene.

She’s very rambunctious and works hard to entice Ralph to play with her. Ralph’s been a very good Mom and often obliges, even though a wrestling match between a kitten and an experienced barn cat is really not a fair fight.

She’s even started to grow into her head, which as a kitten was her most defining characteristic. We only occasionally slip up and call her by her baby name.

Being an only child, Easter is a wee bit spoiled. She’ll come when Matt whistles, but that’s because she knows he’s a soft touch who’s good for a cuddle, a scratch and even a treat. I’m still working on training her that she’s not allowed in the house (she made it as far as the kitchen one day) or on the patio table when we’re having lunch outside.

In the family roles, I’m the enforcer and Matt’s the enabler.

Ahhh, the challenges of parenthood.