Friday morning at work, a colleague who reads my blog regularly marveled at how much Matt and I have accomplished at the farm so far. I didn’t totally agree. Sometimes I see the difference that we’re making. Sometimes I just see the things left undone and the rest of the to-do list.

July does feel like a bit of a milestone to me, though. A turning point. Or a halfway mark. So I have decided to declare it the end of phase 1 of this year’s major project–landscaping–and I have decided to take a look at what we’ve done so far. If you’re interested in a refresher, here’s my previous progress report or the to-do list.

My focus has been the immediate area around the house. I used the very thoughtful technique of walk out the front door, turn right and start there. I slowly worked my way around to the side of the house. So the smaller of our two front gardens has been weeded and a new border of grass has been established. 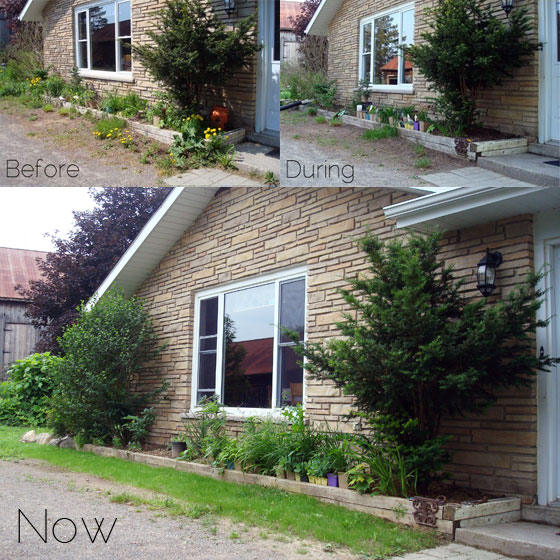 Still to do: Put those poor plants that have been living in plastic pots for at least a year and a half in the ground. Transplant some other plants to fill in some of the gaps in this garden, and maybe give the yew and the Rose of Sharon a hair cut.

Around the corner from the front garden, we come to a creation I’m particularly proud of, the well garden. At the beginning of the spring, this area was a heap of hard-packed dirt strewn with rocks and overgrown with weeds. After digging everything out (including two window wells last year which were unnecessary after we bricked over the broken basement windows), leveling off the dirt, edging it with rocks (some really, really big rocks that required the help of Matt and his Dad to position), transplanting some plants, repositioning the downspout, installing a hose hanger and seeding the grass, it is starting to look like an actual garden. 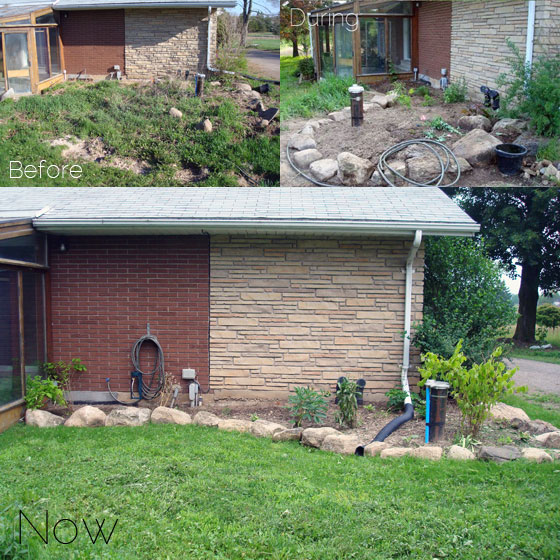 Still to do: Convince the plants to grow. It’s a little hard to see, but I’ve actually planted quite a lot in this garden. I may do a bit more, but I’m trying to restrain myself, because I’m pretty sure once these plants take off, this garden is going to be pretty lush–just what I want.

Let’s go away from the house for a moment across the driveway to the fire pit. This really wasn’t a fire pit. It was more of an area where previous owners burned things. Matt and I have used it a lot as we’ve been cleaning up brush and lumber from the property. However, heaps of ash and brush wasn’t the nicest visual to see when I opened the front door or drove up the driveway. The brush I was able to relocate to a new burn area I’ve established behind the drive shed. The ash got spread around and leveled–and then I went back and forth over it with a big magnet to pick up all of the nails and screws (and hinges, door knobs and other metal) that were mixed in. The rock pile that I discovered buried in ash was picked up and dumped in the main rock pile behind the barn–talk about a dirty job. 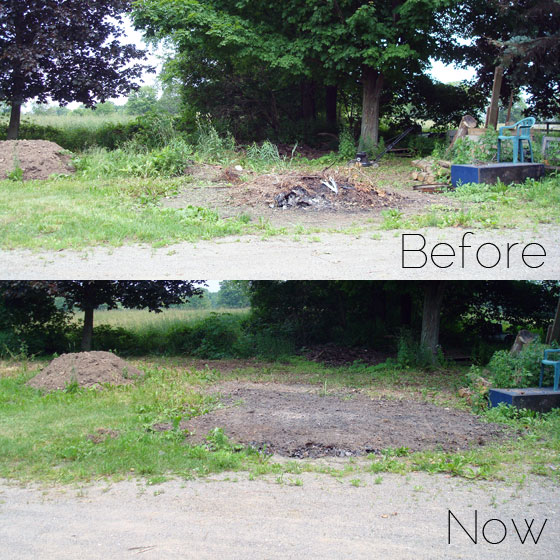 Still to do: Make sure all of the metal has been picked out of the ash. Mix some manure and soil in with the ash so that grass might actually grow and seed it. Relocate the lawn chair and bench that were plopped beside the fire pit. Relocate the remaining large logs and lumber that were stacked waiting to be burned. Get rid of the dirt pile.

Between the fire pit and the house is the biggest undertaking of the year, the turnaround. This former mountain goat territory has been leveled, fertilized with loads and loads of manure and rototilled. I built a brick pathway across the middle of the garden and planted some bushes, hostas, trees, tomatoes and lettuce. 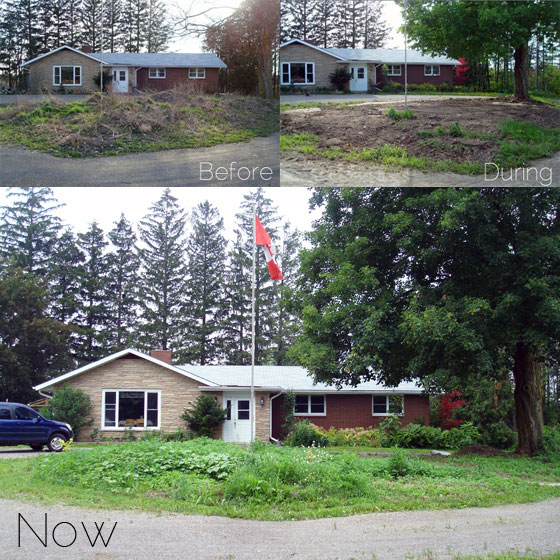 Still to do: Finish the pathway–I need 60-80 more bricks and sand to fill the joints in between. Put a bench beside the path. Pull the weeds that have sprung up. Plant a whole lot of plants. Seriously. This thing is going to eat plants.

So it’s probably obvious from this post that I can’t just focus on what we’ve done so far. Although looking at the photos above, I am able to see the transformation happening. Slowly, ever so slowly, it’s starting to look a little more like the picture in my head (or on my Pinterest board).

How are you doing on your summer to-do list? Are you looking ahead at what’s yet to do? Anyone have any tips for living in the moment and appreciating what I’ve done so far?