How many people dream of a mudroom that looks like this?

This was not in the cards for our mudroom update.

Some day, I plan on having this mudroom. However, that will involve demoing the current mudroom, building a front porch, relocating the front door, constructing an attached garage and converting part of the pool room to my dream mudroom–complete with heated floor and built-in cabinetry. This is a project that is somewhat, shall we say, down the road.

My current mudroom project was all about the budget challenge: make the room both functional and pretty for minimal money. That meant DIYing, reusing and lipsticking. You know, a makeover, not plastic surgery.

The first decision that I made was exactly what colour of lipstick. It might be an unconventional choice for make-up, but I knew I wanted to go blue–something like the sky outside. The mudroom is a transitional space between inside and out. It seemed appropriate to reference nature. While paint usually intensifies when it’s put on the walls, I was worried that the colour actually might appear lighter in the mudroom, given the number of windows we have. When I saw Wythe Blue on House of Turquoise, I knew I’d found my paint.

Wythe Blue via House of Turquoise

I may be more than a year late to the Wythe Blue party, given that Benjamin Moore named it colour of the year for 2012, but I finally made it.

Inspired by this entryway update from Casa de Lewis, I considered installing paneling, or board and batten, or even just a very simple plate rail. 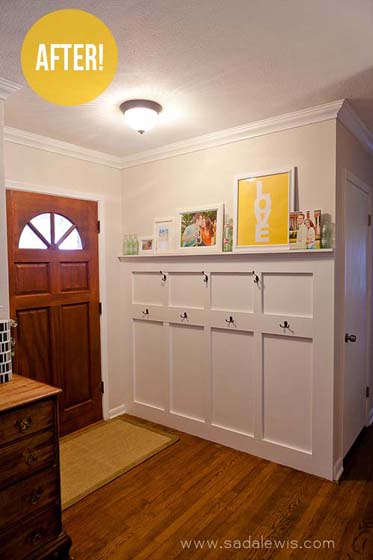 Board and batten entryway from Casa de Lewis

But then I remembered that with two doors, a window and a large closet, actual wall space was pretty limited, and I decided that extra mill work wasn’t worth the effort (plus, let’s be real here, it would have upped the budget ever so slightly, and I am super cheap).

I also wanted a place to sit down and put on/take off my shoes. By that I mean, a better place than the park bench plopped in front of the closet doors. A simple rustic bench with enough space to tuck boots underneath would do nicely. 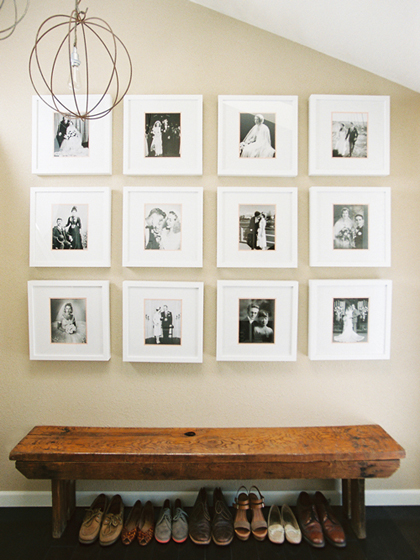 My plan was to put it all together, cross my fingers and hope that when it came time for the big reveal, I had a tearjerker What Not To Wear moment and not an Extreme Makeover gone wrong.

And that will be coming up next.

What’s your favourite shade of blue paint? Have you added paneling on your walls? How do you handle seating in your entryway? Are you a What Not To Wear fan? Who remembers Extreme Makeover when it was plastic surgery?