This post has been a long time coming. I don’t know why it’s taken me so long to write this, but it’s finally here. Everything you wanted to know (and more) about our solar system.

… I mean, our solar panel system… the one on the barn… not the one in the sky. 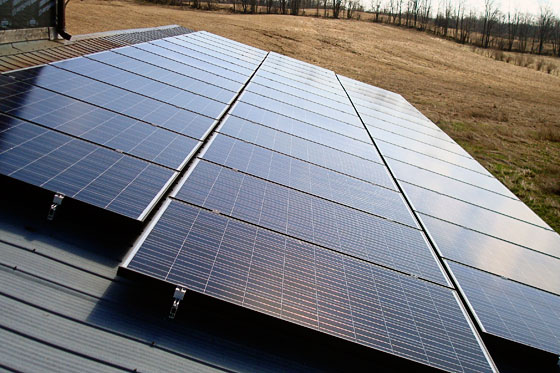 In fact, now that I’ve started writing, I have so much to say that I’m breaking it up into several posts. In today’s post, we start at the very beginning.

How solar works in Ontario

The provincial government operates a program through the Ontario Power Authority to encourage people to install solar panels. The program is called microFIT. It’s micro because it gives people “the opportunity to develop a small or “micro” renewable electricity generation project (10 kilowatts or less in size) on their property.”

Under this program, we enter into a 20-year contract with the government. We produce and deliver electricity to the province’s grid, and we’re paid a guaranteed rate per kilowatt for the term of our contract.

So we’re not “off the grid.” All of the power we generate goes directly back to the grid. We still buy the electricity that powers our house from the grid. This might seem weird to people. I’ll go into the numbers more later this week, but here’s the basic explanation: the government is paying us $0.396 cents per kW for what we generate. We’re paying the government $0.075 cents per kW (off-peak) for what we consume. 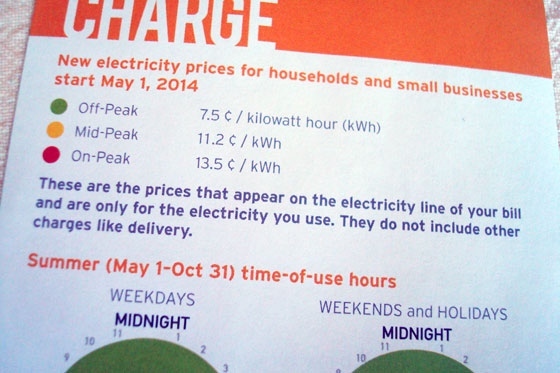 Once we made the decision that we wanted to go solar, we started meeting with contractors. Given how the microFIT program works in Ontario, lots of companies are full-service when it comes to solar installs. They take care of all of the applications to the government, they install the system, they monitor your system, they fill out all the paperwork along the way, they arrange for all of the inspections, they even help you apply for financing if you need it.

We found companies to contact through road side signs (there are lots of solar installations in our area). The company that we chose is called Hayter. Hayter had great service, had been around for a long time, offered a decent price, and the people we met with were very knowledgeable and down to earth. 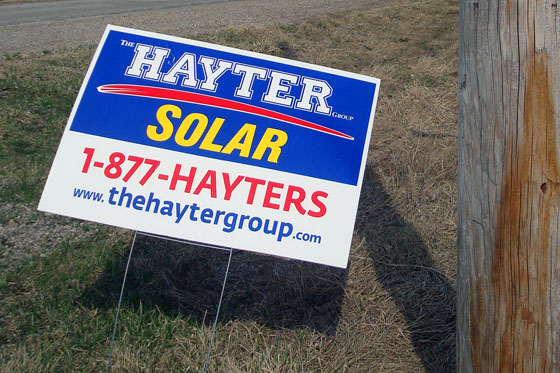 This was not a quick project. We met with Hayter for the first time in July 2013, liked them and decided to go with them. They submitted our application to the government. Our application was rejected about three times due to minor clerical errors. The microFIT forms are very complicated and missing even the smallest check box causes your whole application to be thrown out. We were very glad to have an experienced company working with us and taking care of all of the paperwork. I cannot imagine having to figure that out on my own.

Finally, our application went through. But that wasn’t the end of the bad news. In September, the government suspended the program. They were going to re-evaluate the rate that they paid per kW. When the microFIT program first started, the government paid about $0.80 per kW. When we applied, the rate was $0.55. The suspension meant that our application was dead, again. After re-evaluation in September, the new rate was $0.396. The decrease was very disappointing for us, but we decided to proceed anyways. We’d still be earning more for what we generated than we were spending on buying electricity from the grid.

We resubmitted our application. By mid-October, we got the good news that we were in. October 31, we made our first payment to our contractor, and they paid all of the fees with the government. And then came five months of nothing. Our solar company had said that they could work through the winter and complete our install before spring. However, the winter of 2013-14 wasn’t a normal winter. Between polar vortexes, ice storms and snow, nothing could happen. 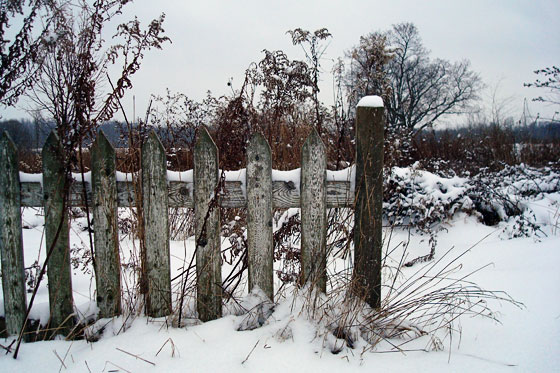 Under the terms of our agreement with the government, we had six months to complete our install. That gave us until April 30. As spring slowly rolled around, we anxiously waited for work to begin.

Ooooh. Such a cliff hanger ending. Tune in next time to find out if installation begins and whether we meet the deadline.

If you have any questions, please feel free to ask in the comments, and I’ll do my best to answer them in upcoming posts.