Anyone know anything about lilacs, Japanese maples or holly? Each of mine is feeling under the weather.

The lilac is probably my biggest concern, simply because this plant has tremendous sentimental value to me. My bush grew from a shoot that sprouted off my grandmother’s lilac. It survived the move from our first house to the farm and up to now has thrived in the front flower garden. However, this summer the leaves started getting dry spots and then the tips curled under.

When I unfurl the leaves, there’s a dirt-like substance inside. If there’s parasites, they’re too small for me to spot.

Anyone have any guesses what might be wrong? I’d really rather not lose this plant.

The Japanese maple has his own problems as well. First, I will concede that he’s pretty crowded. I’ve been working at thinning the ferns since spring. The walnut tree is obviously another problem. I don’t have a good excuse why he’s been allowed to invade the maple’s personal space so much. Whether it’s crowding or some other issue, the tippy top branches are losing their leaves.

Like on the lilac, the leaves are drying out and falling off.

The Japanese maple took a beating during the ice storm. The trunk was completely wrapped in ice that was a quarter inch thick.

I was wondering if the tree is still traumatized from his winter ordeal. He’s just a bit weak this summer. He’ll pull through and grow more leaves next year. Won’t he? Or is that wishful thinking?

The final patient is my holly bush. Now I have to take most of the blame for this guy’s misery. He used to live in the front flower bed. However, I redrew the border of the bed, and he fell outside the line. I dug him up and moved him around the corner to the well garden. He was fairly well established in the front bed, so I cut through some pretty big roots when I transplanted him. He’s not fully recovered yet. You can see the leaves are pretty sparse and fairly yellow. 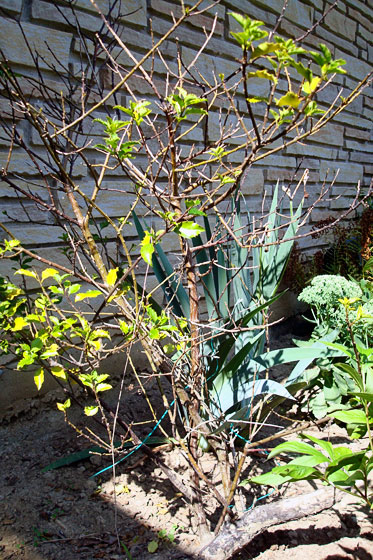 In my defense, I do have to say he wasn’t the healthiest guy before I moved him. He had very few leaves and probably produced all of a half dozen berries for the two years we’ve lived here. He seems to be plagued by ants. When I dig around the trunk, both at his original home and now in his new location, I unearth what looks like a whole colony. There’s not much bark left on his thick old trunk, and I wonder if the ants are eating him. 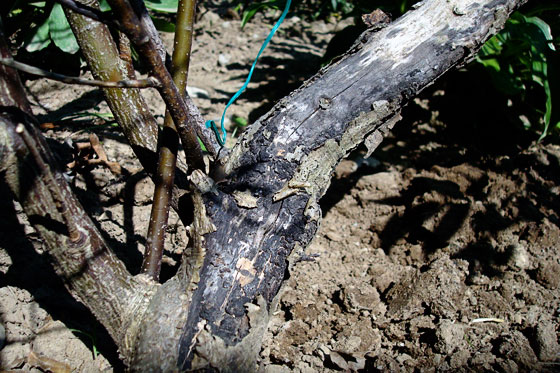 When I pulled off a leaf, though, I found a different type of pest.

Is this little green caterpillar the culprit? Is it the ants? Or the transplant?

I’d really appreciate any ideas anyone has. Anyone else having botanical illnesses in your own gardens this year? Let’s commiserate in the comments.