A year ago, we flipped the switch on our solar panels and started generating electricity. I thought it might be neat to take a look back at the past year and see how our little generating station worked out.

If you want to catch up, here are all of the previous posts about Going Solar.

Just a reminder, we’re part of Ontario’s microFIT program. Under this program, we install solar panels, and then the power that we generate goes back into the provincial grid. The province pays us $0.396/kWh.

Over the past year (10 months actually, since our first payment didn’t arrive until July), we made $3,621.13. Each month the hydro company pays us for the electricity we generated two months before. 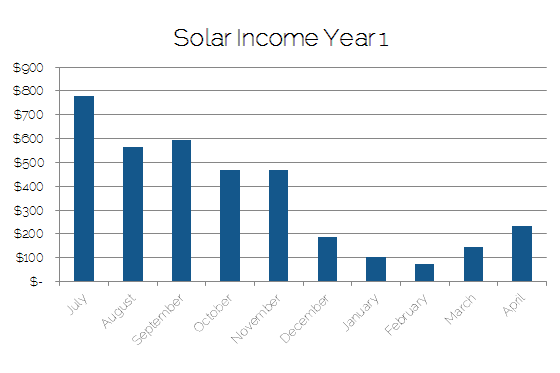 Just for comparison, we spent $2,604.35 on electricity for the same time period (including the wee bit of power it takes to run the panels). That’s a profit of just over $1,000. Yay to coming out ahead!

Our inverters tell us roughly how much we make each day. So far, our record is just over $29. Matt so badly wants to break $30.

When the panels were first installed, I estimated it would take 8 1/2 years before our income equaled the investment we made in the panels. Using the numbers from the past 10 months, it looks like the payback period is about 9 years and 4 months. I’m optimistic that spring is going to be a good generating time for us, though, so I think the 8 1/2 is still achievable.

The winter was pretty dismal. There were lots of days where the income was in the single digits. The sun being in the wrong hemisphere was the biggest problem, but then there was the snow. Snow on the panels drove Matt crazy. After a couple of big storms, he climbed up on the barn roof with a broom and very gently cleared the panels.

The solar array is pretty big though, and Matt’s arms are only so long. There was one hard-packed drift that he just couldn’t reach. This thing was his nemesis.

Eventually, with some yoga-like contortions and gentle shovel work from Matt, combined with the help of–what else?–the sun, the drift slid down the panels and off the roof in big icy sheets.

Once we hit February, we started having lots of sunny days. As the sun returns to the northern hemisphere, our output has been climbing every day. Even cloudy days result in double digits.

Beyond the snow, we’ve had no issues at all. The inverters and the panels all are chugging along, the money is trickling in, and we’re doing our part to generate some clean power. We’re really happy with our decision to install the solar panels.

4 thoughts on “Solar one year later”