Sarah in Illinois has been chicken farming for about a year. And in case you haven’t guessed from her previous posts, she’s enjoying it. Now she’s expanding her flock, and she’s here today to tell us all about it.

I have mentioned a couple times that I would like to add to my flock of chickens. After a couple weeks of phone and email tag, I finally picked up 4 new hens last weekend. I bought them from a family farm and CSA that is not too far from where I live.

I had very few requirements when looking for new hens. I wanted chickens that were no longer chicks but still young, commonly called pullets. I was not particular on breed, I would have chosen a couple Leghorns if available, for their white eggs, but other than that I really didn’t care. 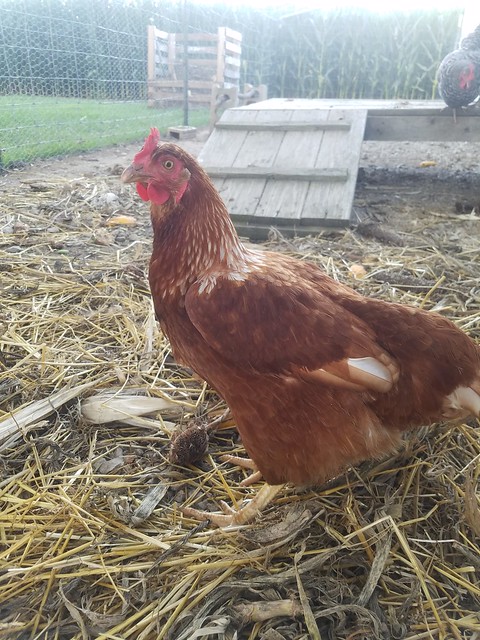 This farm had only Red Sex Link which meant that they were Rhode Island Red crossed with another breed. The person that I picked them up from was not sure what they were bred with but since I have no interest in breeding chickens of my own and purely wanted them for the eggs, I really didn’t care what breeds they were. 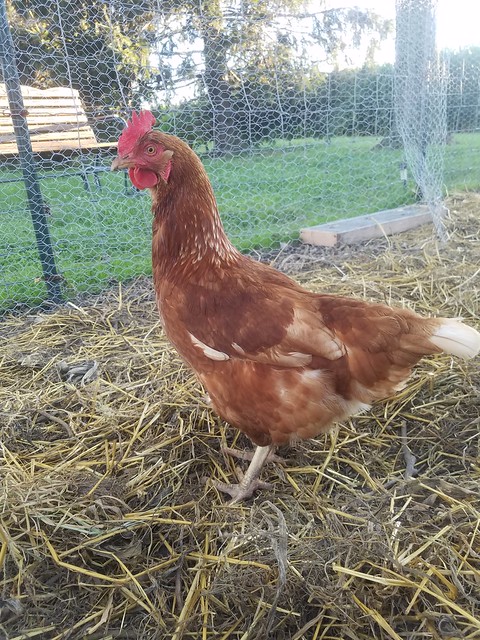 The chickens I picked up are 9 months old, which means they are already laying. And after a day off from all of the trauma of relocating and meeting my older hens, they started laying right away. 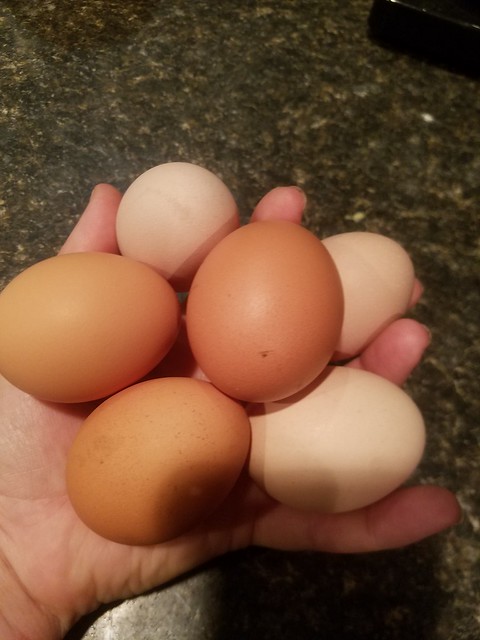 Speaking of meeting my older hens, I had done a little research and randomly had a conversation with one of my customers at work on the best way to integrate the new tenants. 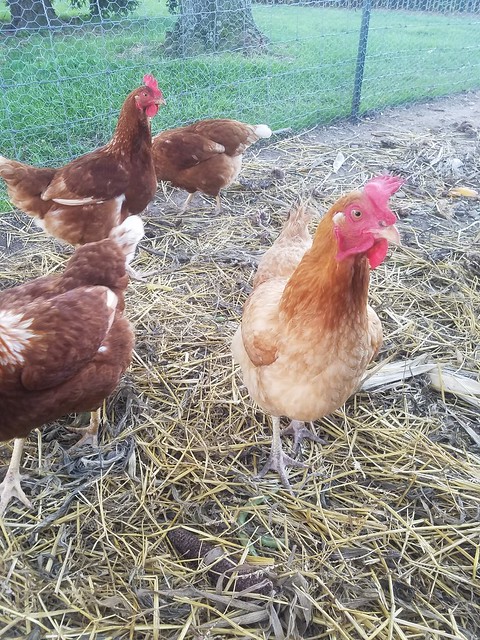 Basically, we did none of that.

I did keep them apart for a short time, but then Steve got in the run to be referee and told me to put them all in together. It was quite comical to watch him reprimanding chickens but honestly it worked pretty well. 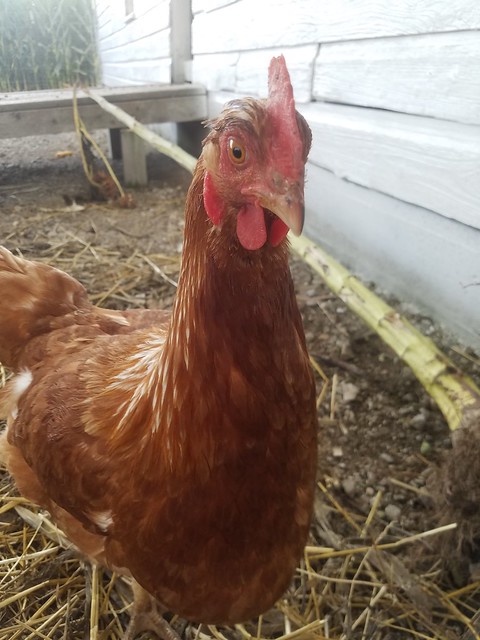 Since I brought them home early on a Saturday morning we were able to work in the yard and keep an eye on them all day both Saturday and Sunday. That way if there was a serious injury, we were right there to be able to intercept.

Another distraction was Blitz. He was quite entertained by the new chickens and ran back and forth along the run. I think it was helpful. The chickens were more worried about the 80 pound dog than picking on each other. 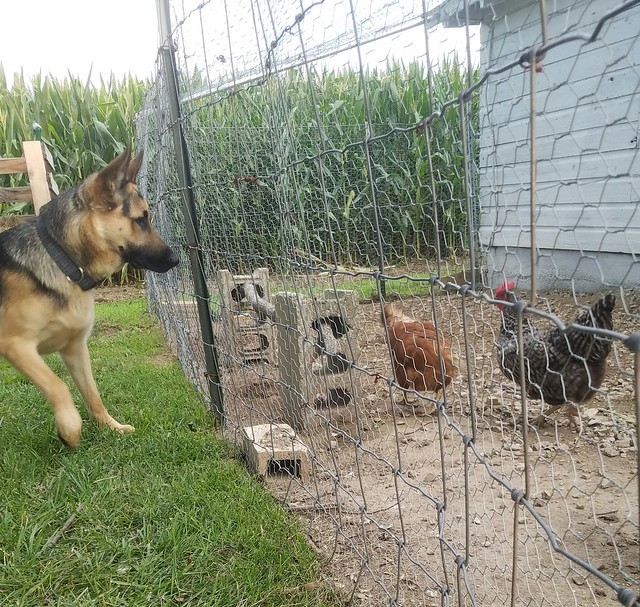 I was prepared for more serious injuries. Chickens do have a pecking order and when they assert their position they are likely to peck and injure each other. However, once a chicken is bleeding it is more likely to be picked on by the other hens. So I purchased a lotion that not only helps heal injuries, it dyes the blood a different color so they are less likely to be drawn to the injury. I am very thankful so far I have not even opened the bottle. 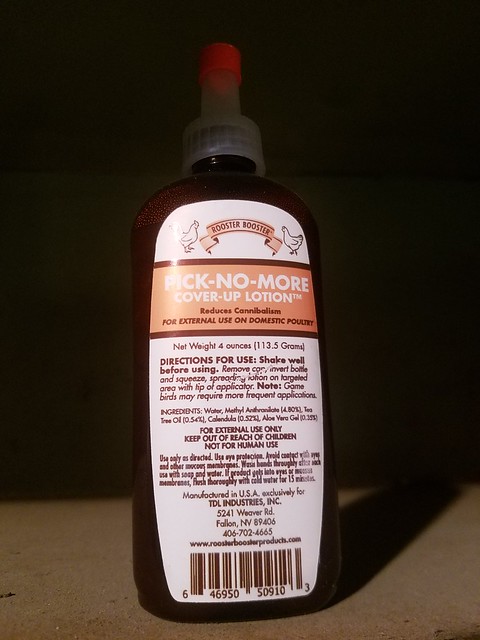 As I write this, the chickens have been together one week, and I can say I think everyone is getting along very well. I still occasionally see an older hen dash across the run and peck a newbie for no reason whatsoever, but overall, I think things are going very well. 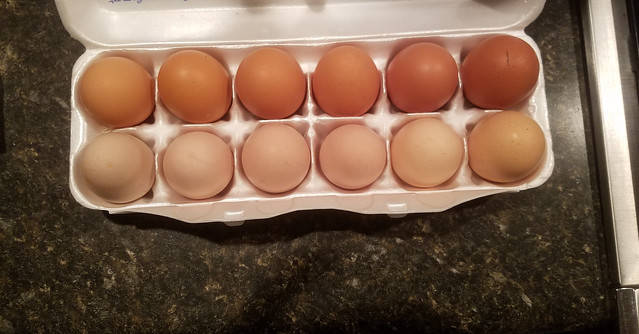 I am consistently collecting 5-7 eggs every day. It is also exciting that the new chickens’ eggs are much darker than the older hens. They are actually quite pretty. Hmmmmm…maybe I need to start looking into Easter Eggers…

I’m so glad that your new chickens have integrated well with your older ones, Sarah. I’ve heard it can be very challenging. Glad to see that Blitz is still helping out around the farm. I love the colour of the beautiful dark eggs. I think you definitely need to explore more colours.

3 thoughts on “New chickens in Illinois”