Ahhh, a peaceful weekend morning in the country. The bugs buzzing and the birds chirping. The hum of a tractor in the distance. The sound of gates creaking and horses neighing at the farm across the road. The pop of gunshots and whir of a helicopter. The… um, what was that?

No, the farm has not become a war zone. But we did have an interesting invasion on Saturday when a helicopter landed in the big field. 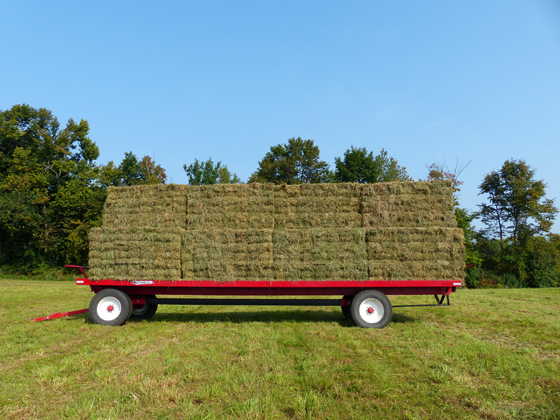 Honestly, I wasn’t paying much attention. There’s a shooting range a few kilometres down the road, so gunshots are something that we hear fairly regularly. They’re just background noise to me now.

I definitely heard the helicopter. But again, I wasn’t concerned because there have appeared to be helicopter lessons happening over the farm throughout the summer. They fly low and they fly around and round. It’s noisy and odd, but not novel anymore.

However, a helicopter landing on our property is novel, and apparently that’s what happened.

Matt, who was out for a walk with Baxter, had seen the helicopter. However, he wasn’t expecting to see it touch down in our field. Matt and Bax were on the road, some distance from the field, talking with a police offer who had pulled over when he saw the helicopter flying erratically.

The helicopter only touched down for a few minutes, so Matt–and the cop–didn’t have a chance to find out what was happening. And I didn’t get a chance for a picture.

The cop’s comment was, “If it crashes on that side of the road, it’s the city’s problem. If it’s on this side it’s our problem.”

Ummm… if it crashes, it’s a problem period. If it crashes on our farm, that’s our problem. Not helpful input, Mr. OPP.

After an apparently safe takeoff, the police officer went on his way, and Matt and Bax returned for breakfast. Later in the day, Matt commemorated the occasion by finding Predator on TV–hence the title of this post, Matt’s favourite line from that movie.

The rest of the weekend our fields were pretty much back to normal.

Our last hay was baled, so tractors and hay wagons replaced the helicopter. The closest we got to a helicopter was this spinning attachment on the back of the tractor as our farmer was preparing the hay for baling.

Did anything unusual happen at your house this weekend?

7 thoughts on “Get to the choppa”

Leave a Reply to Sarah In Illinois Cancel reply