You saw on Monday that our last hay harvest of this year happened on the weekend. In Illinois, harvest is also underway, although there’s some variation in the crops. Sarah is here today to share a crop report.

Harvest 2017 is officially underway. I say “officially” but that just means that I saw my first combine this week.

If you remember back to some of my spring posts, we had an extremely wet season. 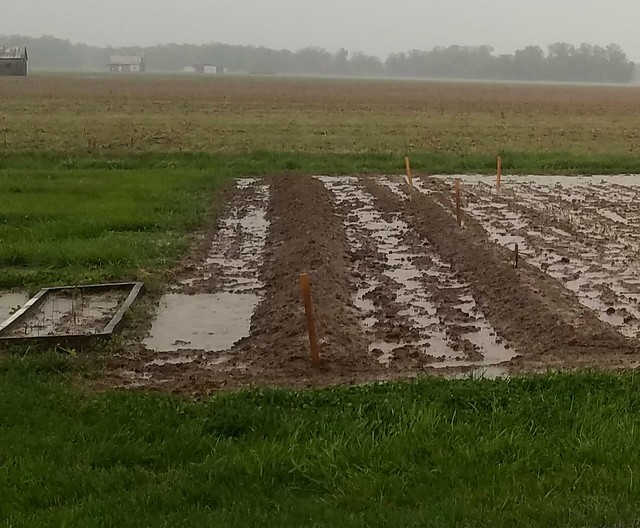 Of course it affected my planting but more importantly it affected the farmers’ planting. Most farmers either had to wait to plant, planted then had to re-plant, or some were just lucky enough that the first planting made it.

With these three scenarios, I find it fascinating that fields that are usually all ready to harvest about the same time are now looking completely different.

I took pictures on my way home one night of different fields of soybeans all in different stages of harvest.

Not at all ready to harvest: 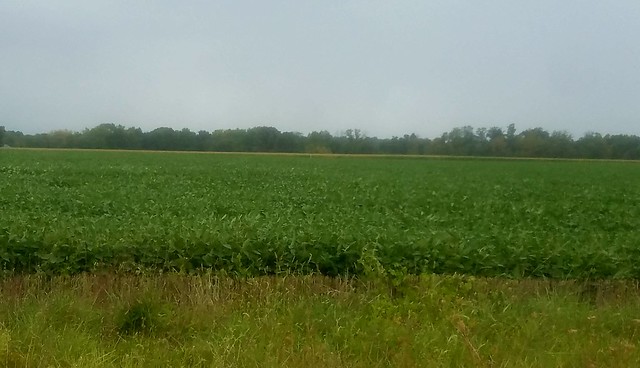 Starting to show signs of the foliage dying: 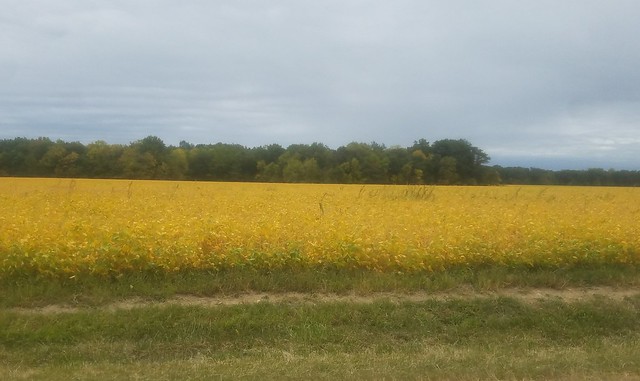 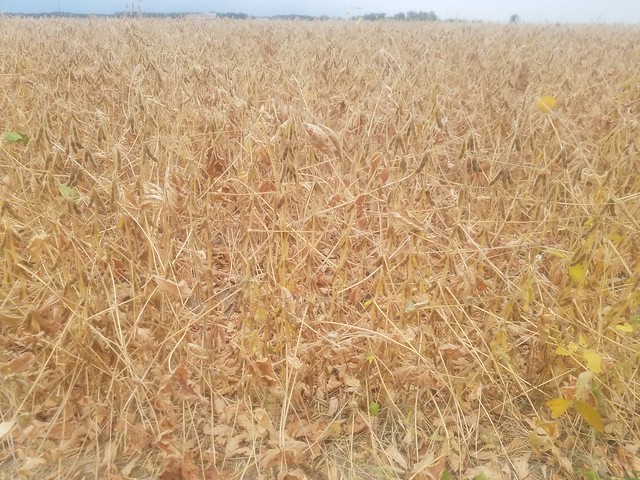 The corn is in similar stages: 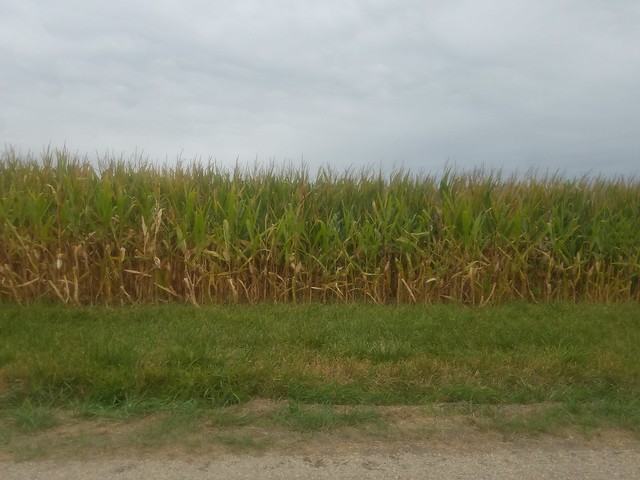 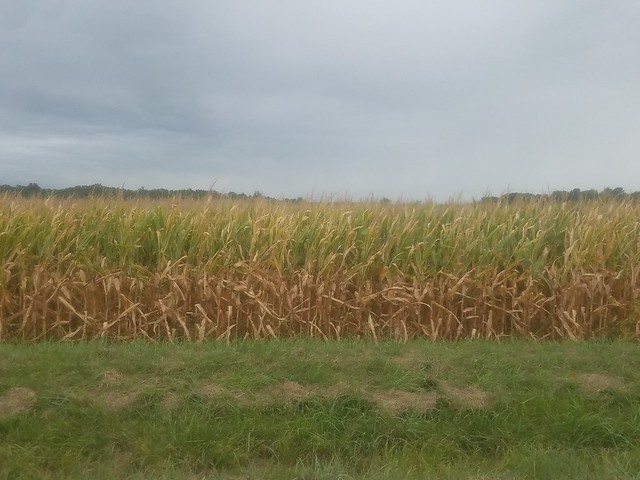 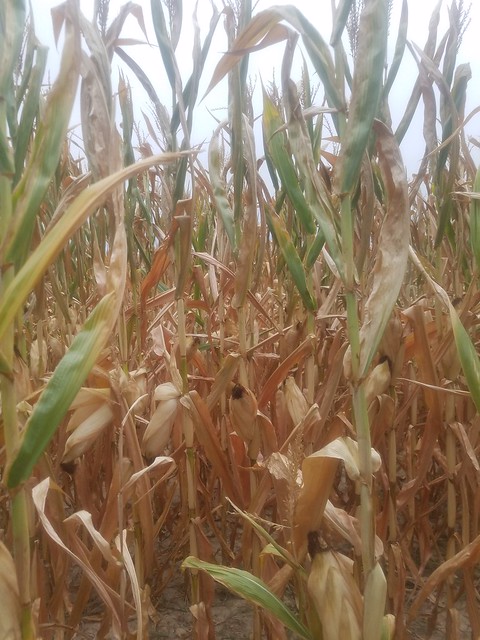 None of these examples are from the fields that Steve farms. He says that he is about 2 weeks away from cutting his first beans. I think this is going to be a long drawn-out harvest season. 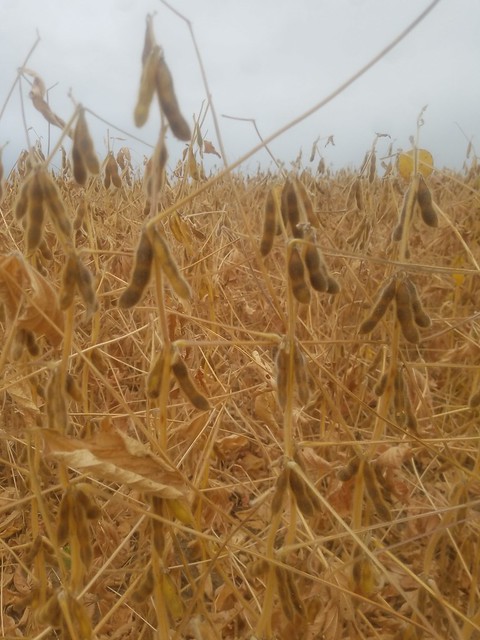 How are crops doing in your area? Have you seen any signs of harvest approaching?

It seems like this has been a good season for hay in our area. The wet weather has meant it just keeps on growing. The farm across the road had at least three cuts, I think. You have me curious about beans and corn, Sarah. I’m going to have to find a field and take a look.

Ahhh, a peaceful weekend morning in the country. The bugs buzzing and the birds chirping. The hum of a tractor in the distance. The sound of gates creaking and horses neighing at the farm across the road. The pop of gunshots and whir of a helicopter. The… um, what was that?

No, the farm has not become a war zone. But we did have an interesting invasion on Saturday when a helicopter landed in the big field.

Honestly, I wasn’t paying much attention. There’s a shooting range a few kilometres down the road, so gunshots are something that we hear fairly regularly. They’re just background noise to me now.

I definitely heard the helicopter. But again, I wasn’t concerned because there have appeared to be helicopter lessons happening over the farm throughout the summer. They fly low and they fly around and round. It’s noisy and odd, but not novel anymore.

However, a helicopter landing on our property is novel, and apparently that’s what happened.

Matt, who was out for a walk with Baxter, had seen the helicopter. However, he wasn’t expecting to see it touch down in our field. Matt and Bax were on the road, some distance from the field, talking with a police offer who had pulled over when he saw the helicopter flying erratically.

The helicopter only touched down for a few minutes, so Matt–and the cop–didn’t have a chance to find out what was happening. And I didn’t get a chance for a picture.

The cop’s comment was, “If it crashes on that side of the road, it’s the city’s problem. If it’s on this side it’s our problem.”

Ummm… if it crashes, it’s a problem period. If it crashes on our farm, that’s our problem. Not helpful input, Mr. OPP.

After an apparently safe takeoff, the police officer went on his way, and Matt and Bax returned for breakfast. Later in the day, Matt commemorated the occasion by finding Predator on TV–hence the title of this post, Matt’s favourite line from that movie.

The rest of the weekend our fields were pretty much back to normal.

Our last hay was baled, so tractors and hay wagons replaced the helicopter. The closest we got to a helicopter was this spinning attachment on the back of the tractor as our farmer was preparing the hay for baling.

Did anything unusual happen at your house this weekend?

Last week our farmer harvested our fields. It’s been an incredibly dry season. As the tractor rolled across the fields dust plumed behind the wheels.

The fields had been planted with oats. Our farmer was not happy with them, but it looked like he got a good quantity of bales.

He was hoping desperately for rain in the next couple of days. Underneath the oats, he had also planted hay. We needed rain or else we were going to lose all of his seeds.

On Wednesday night, just a few hours after the harvest, the skies opened up. We had rain off and on for two days.

Hopefully that means good things for his seeds.

It would be nice to have another harvest yet this year.