We are officially in the month of winter now. (Happy first of December, BTW.) That means I have just 21 more days to finish my fall to-do list. And if I’m going by the weather rather than the calendar, who knows how long I have.

Anyone else feeling the pressure?

Here’s how we’re doing as we head into the final stretch.

1. Clean out the vegetable garden

I think I’m cutting my losses on the vegetable garden. Matt did a pass over one quadrant with the rototiller as he was running it out of gas. All of his work leveled out the dirt and uprooted the last of the weeds.

I’ve trimmed the asparagus and wrapped (most of) the grapes in burlap. Remember last year I did this in the snow? I was feeling pretty good about picking a mild Saturday before the snow arrived to get this done this year.

Then I ran out of burlap.

So this is almost done.

In keeping with the theme of cutting my losses, I bought two large tarps. My oldest nephew, who has been giving us lots of help at the farm, worked with me to spread them over half the garden. I’ve talked before about my love of tarps for killing weeds. So at least half the garden is tended. 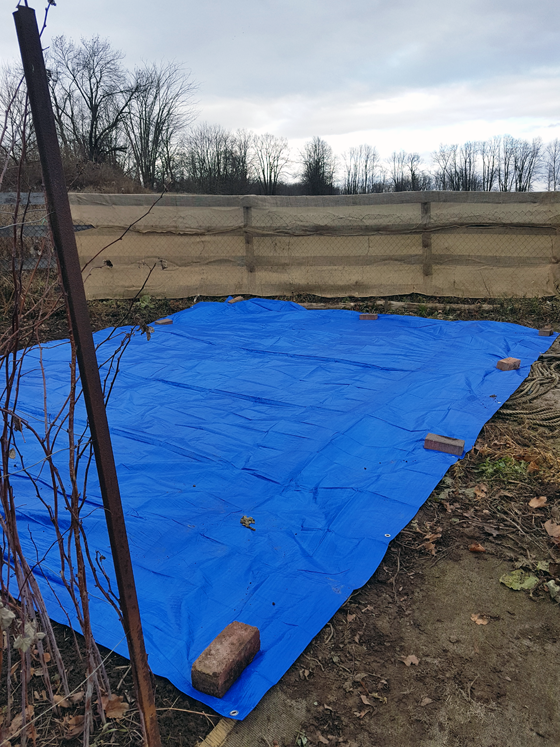 And lest there’s any confusion about what cutting my losses means, here’s the other half of the garden. Partially wrapped grapes, plants still in the ground, weeds, even the little sticks with the seed packets on top saying what’s in each row. Let’s just call this compost, shall we? 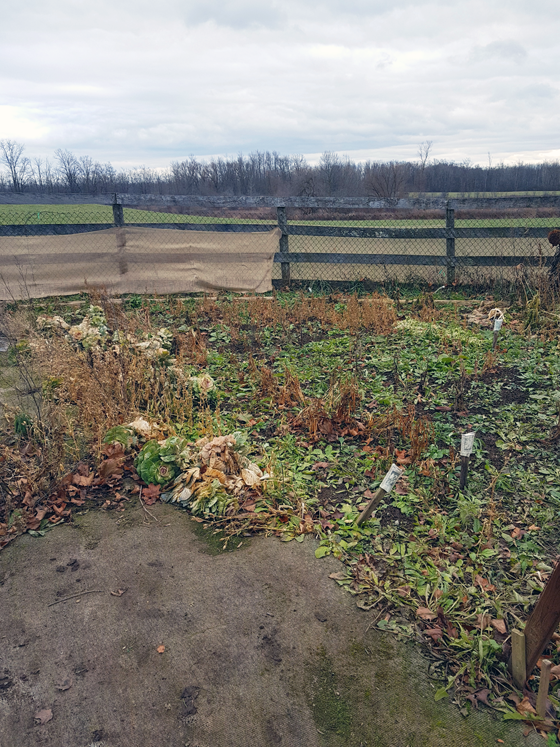 The dining room is still the only window that is screenless. I will get to the others in the next 21 days.

4. Put away the birdbath and put out the feeder

Done at last update. I’m loving watching the birds at the feeder as I’m working at the dining room table.

This is another cutting my losses scenario. Not done. Won’t be done. Spring is soon enough.

Matt’s done this once. Maybe one more to go?

7. Switch out the mudroom mats

Done just before our Christmas party. As in hours before. Great, except that I forgot the mat takes awhile to relax after being rolled up all summer. We had a variety of footwear and even a level and square spread around when guests arrived trying to flatten it out.

Here’s my post on how I DIYed a large mat for our mudroom.

Done, as you saw in my post earlier this month.

Still to come. Anyone want to arrange a detailing session for me?

Matt and I took the mower deck off (as snow flurries flew around us). Then my cousin came over and changed the oil for us. Ralph and Bax supervised, until Bax decided he was bored and chased Ralph. He ended up in the house on a timeout, which may have been his plan all along. Dude’s work ethic is seriously questionable.

But my cousin’s is not. We’re very grateful for all of the help we get around the farm from our families.

12. Pick up the lumber pile beside the silo

Done, thanks to some more helpful cousins.

13. Regrade back and side of house

Another cut my losses. Boo. Add this to the spring list.

As fall progresses, I keep finding other things I need to do. Big things like putting away the hoses and turning off the outside water. Oops. That’s one not to forget (and now that I’ve remembered, it’s done).

I don’t like conceding defeat on these items. My mantra was, “Everything I do now is something I don’t have to do in the spring.” Because scaling up in the spring is as much effort as winding down in the fall. But c’est la vie. Everything is not going to be done.

But we’ll be done enough to be ready for winter.

At least my fingers are crossed that that’s the case.

How are you doing on winter prep at your house?