Remember this picture from my 2013 home goals? 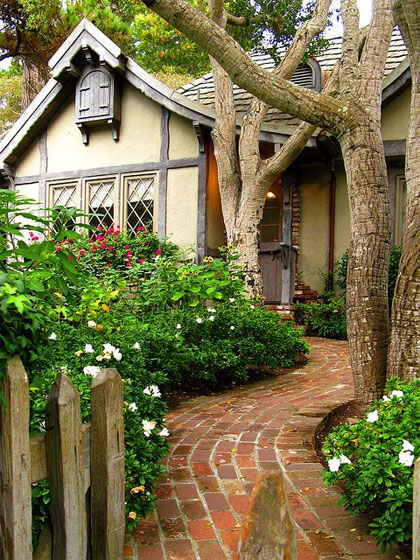 This is my inspiration for the garden I’m building on the turnaround at the front of the house. Lush. A little bit wild. A beautiful brick walkway winding through.

Honestly, the path is an excuse to use up some of the piles of bricks that we have lying around the farm. But, it does have two additional benefits: the path will save us from having to walk all the way around the turnaround when we want to get to the other side (it’s farther than you might think) and it will be an attractive feature at the front of the house (I hope).

The path is next up on the landscaping list. I’ve dug out the route across the turnaround and gathered my bricks. Now I’m just trying to decide how to lay them: trendy herring bone or traditional brick pattern.

If I go with the straight brick pattern, I’ll probably do six courses, not the five that are pictured here. If I go with the herring bone, this is pretty much what it’s going to look like. I’m not going to cut the bricks, so the edge will be a bit ragged. It will probably be hidden eventually by all of the lush plants, but that might take a little while.

I think I know what you’re all going to say, but I’m going to put it to a vote nonetheless. What do you think?

For those who might be concerned by the photo above, I am not going to lay the bricks directly on the dirt. I’m planning a base of sand, which we also just happen to have a huge pile of lying around. I’d use gravel, but the gravel in our pile (yes, we have one of those too) is a bit too large to provide a really stable base.

Feel free to expand on your opinions on polymeric sand, the beauty of herring bone, dos and don’ts of brick laying, fast growing plants and any other topic that strikes you in the comments. I appreciate any advice.

4 thoughts on “Time to zigzag or stay on the straight and narrow?”