Today is one month since Baxter came to live with us. Even though he’s obviously hoping that his natural ninja skills have rendered him invisible, I wanted to put the focus on him today to write about how we’re adjusting to our new lives together.

I’ve read that it sometimes takes a few weeks with a rescue dog to see their true personality. I’m not sure if we’re there yet with Baxter, but I have seen some changes since we first adopted him.

Food: When he first came to us, Baxter was not what I would call food motivated. He scarfed down his breakfast and dinner, but he really didn’t care very much for treats. When I gave him a kong the first time, he was pretty disinterested. It was just too much work to get the kibble out of the toy. I persisted, giving him a kong full of kibble before giving him the rest of his breakfast, and after a few days his enthusiasm increased noticeably, and he emptied the entire kong–a momentous occasion. He’s a little more enthused about treats and even his kibble now. He’s also extremely enthused about hotdogs, which we’ve been using for some training.

Training: I wish I knew more about his background, because Baxter has obviously had some training. He knows he’s not allowed on the furniture and aside from a couple of weak efforts the first couple of days doesn’t try to climb on the couch or chairs. He’s housebroken. He knows sit and will now plop down when we snap our fingers. He’s very good on the leash, sticking by our sides when we walk. He does like to follow his nose sometimes, but usually the slightest tension on the leash as he falls behind or pulls ahead moves him back to our side. He’s pretty good at stay too. He doesn’t seem to know down, and come continues to be a problem. I think he knows it, and we’ve practiced it lots, but he likes to amble and sometimes he has better things to do altogether. Occasionally he seems a bit stubborn or disinterested in obedience, even for commands he knows. We’ve gone back to basics working on eye contact when we say his name, which I think will help.

Energy: Baxter is a low energy guy and tends to spend his days dozing as much as possible. I take him for a 20-30 minute walk in the morning, and then Matt usually does a long walk in the afternoon. In the evening we’ll sometimes do another short walk or a ramble in the fields. Depending on his mood, we may do “zoomies” dashing and chasing around the yard. Whether it’s zoomies or toys or a ball, Baxter usually loses interest after a few minutes and goes back to lying down.

The run: The outdoor dog pen is not a hit. So far, it’s been an opportunity for Baxter to demonstrate his determination as he comes up with yet another way to escape. He doesn’t run away. He just comes looking for us. Dude does not like to be alone. He’s fine if one of us sits in the run with him or even if he can see us puttering around outside, but once we’re out of sight, the whining starts and the escape follows soon after.

The cats: Ralph, Easter and Baxter are getting along… like cats and dogs. More than anything, Baxter wants to be friends. However, Ralph has declared them mortal enemies. She’s also obviously told Easter a few big bad wolf stories. Our playful little kitten, while slightly more curious, is no more warm and fuzzy than her mother. Easter came close the one day, but rather than letting Baxter sniff her (and okay, a big, wet tongue may have been heading her way too) she chose to hiss and claw. And as soon as the cats take off running, Baxter is compelled to give chase, even if he’s been sitting quietly up to then. 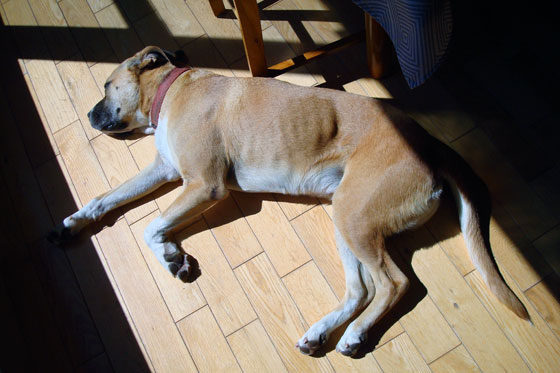 Social skills: So far, Baxter has not met a person or a dog he doesn’t like. We take him to the park when we play baseball, and he lays quietly on his long lead while we’re on the diamond. We go on group walks with our vet clinic, and he’s very friendly with all of the other dogs and people. We’re very vigilant around other dogs still, but so far he’s been very polite. He meets everyone, but he’s usually not that interested in playing, so he just sits down by himself once he’s sniffed enough. I would like to see him be a bit more playful, but a more important next step is working to help him understand that just because there’s a new person or dog around, he doesn’t automatically get to meet them.

The issues: The one issue that I’ve seen develop over the past month is a bit of an attachment disorder. We’ve left him alone a few times, and he’s been fine on his own in the house. However, he’s a little bit anxious about us leaving. Gathering keys or opening the front door often makes him get off his pillow to investigate, and occasionally he lays on the mat at the front door making sure no one sneaks out on him. Even staying on his pillow in the basement while we go upstairs to get a snack in the kitchen is hard for him. He seems to be slightly more attached to me than Matt, but company in general is most important to him. We don’t want to create any separation anxiety, so we are trying to not make a big deal out of comings and goings, trying to help him realize that if we leave we will come back, and trying to help him learn that he’s okay to be on his own.

The biggest thing that I’ve learned over the past month is that I am absolutely a dog person. Matt and I have been waiting a long time to bring a dog into our family, and I’m glad that it finally happened. Baxter seems to be a good fit for us. I just hope that we’re good for him too.