It’s been nine months since our new carpet was installed. And it’s been nearly seven months since I posted about our need to buy a vacuum.

It’s been two months since we got Baxter, and it turns out that Matt’s sock fluff has nothing on dog fur.

The vacuum situation had become critical.

So, in the category of better late than never, I’m pleased to introduce Sebo. 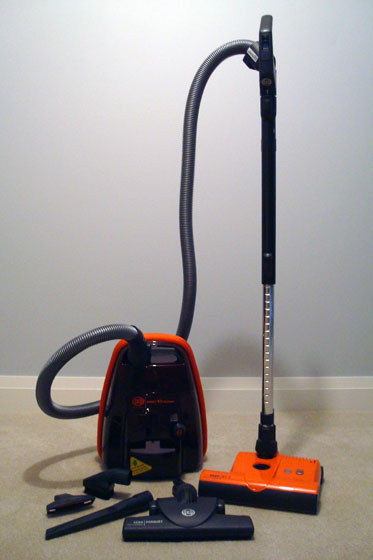 Sebo didn’t even figure in my original vacuum research, but after seeing it at the vacuum shop, it edged out the other brands. The salesman described it as comparable to Miele, which is also made in Germany. The Sebo has similar filters and attachments. However, I found the Sebo power head easier to maneuver than the Miele. Plus the power head is a little easier to take apart myself if something gets sucked up by mistake or wrapped around the beater bar.

The Sebo is about the same price point as the Miele, which is expensive. I may have spent more than I needed to on a vacuum, but I wanted something that worked really, really well and I didn’t want to have to buy another one any time soon.

So what’s the verdict?

Ladies and gentlemen, I am thrilled to tell you that my carpet looks brand new. It’s like I’ve gone back in time nine months. The beater bar is really effective at picking up all of the fluff and fur and bits. A dial on top of the power head sets the height, and a light glows green when the height is set correctly, so it’s really easy to figure out. I ended up lowering the power head by one notch. When I did, the drag on the wand increased noticeably, so it felt a little heavier to push and pull.

However, the vacuum is much, much lighter weight than any of the other uprights that I looked at, especially the Dyson. Weight was one of my biggest requirements because I wanted to easily vacuum the stairs. I pride myself on being a muscly (say it with a hard ‘c’ “mus-klee”) woman, but if I had to muscle (say it like a regular person) an upright vacuum up and down the basement stairs, I feared I would approach body builder proportions.

The hose only stretches so far, so I have to carry the canister with me to reach the steps in the middle of the staircase. The canister will balance on the steps, which makes it slightly easier, but I’m still juggling equipment in both hands. If any manufacturer wants to make a canister vacuum with a twenty foot hose, I am on board. 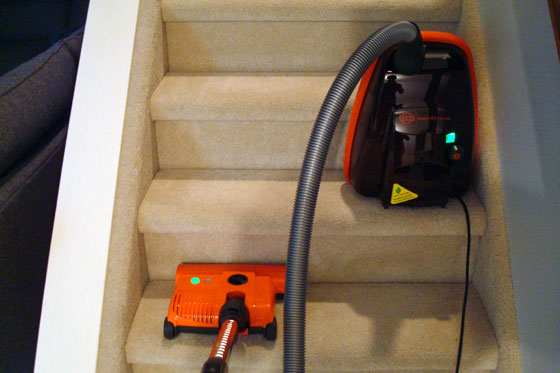 The other wrinkle on stair cleaning is that the power head is a little floppy. The wand will lock in an upright position only, and when it’s locked the power head doesn’t run. Moving from stair to stair is a little awkward, but not overly so.

On a flat surface, the vacuum is super maneuverable. The power head pivots smoothly, and the canister rolls easily on its three wheels, tugged around by the hose. On the hard floor, the parquet head did a good job of picking up dust and fur. A lot of fur got trapped in the bristles on the bottom of the brush rather than being sucked right up, so I had to vacuum the attachment. The other attachments worked well too, although it did take a bit of figuring to work out that the furniture attachment had to connect the crevice tool and not directly to the vacuum.

Overall, I’m happy with Sebo, even though it wasn’t on my radar at first. The original vacuum post still ranks as my most commented post ever. Thanks everyone for your input. If you have any questions about Sebo, I’ll do my best to answer them.