This spring, as I tidied up the woodpile after our first winter with a working fireplace, I did a very scientific calculation of how much wood we would need to stockpile for the next season.

We had most of two rows of firewood left after about three months of having fires every night. We planned to have fires every night again, but we’d be starting much earlier this year than last year (given that the fireplace wasn’t finished until Christmas last year).

I figured three complete rows of wood would do.

When a tree came down in the big field, that was our sign that it was firewood time.

Matt’s Dad arrived with his chainsaw, and he and Matt went to work. In an afternoon, they cut the fallen tree into lengths, and trailered it back to the house.

After their afternoon of work, it was clear that the downed tree was just one trunk out of four. All of the trunks were dead, so we decided it was best to take them all down.

The following weekend, Matt’s Dad was back. He brought three chainsaws and his splitter this time.

We went with our usual division of labour: Matt and his Dad headed out for the tree, and I started up the splitter.

After I had split the first two loads, Bax and I headed out to the field to check on the progress. The remaining three trunks were down, and one trailer was full.

We filled it again (and added a puppy) and filled Matt’s Dad’s trailer (he didn’t get a puppy, but his extra deep trailer took basically a double load of wood).

Back at the house, Matt and I finished splitting and stacking. I got my triple row of firewood. 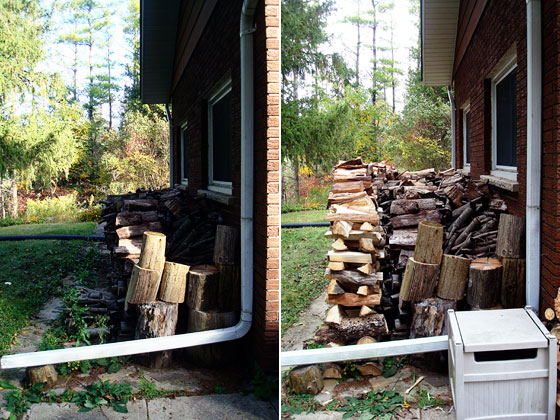 Good thing, because fireplace season has started earlier this year. We’ve already had a couple of fires, which are so, so nice… although I’ve not photographed them (#bloggerfail). I am so glad we finally have a fireplace to enjoy this fall.

Have you done any tree clean-up at your house? Who else is enjoying fall fires? Have you put up firewood this season?