This post has been a long time coming. Loooooooong.

I first posted befores of the basement bathroom on April 12, 2012. We had owned the farm for a month.

We have now owned the farm for 56 months. That’s four years and eight months.

And we’ve finally finished the bathroom.

It’s been pretty much done for most of those 56 months. Matt’s been using it quite happily.

However, I had three pieces of trim to install, one cabinet door to rehang and I still hadn’t found the perfect shower curtain. Those niggly finishing details that dog you for four years. Ugh.

The perfect shower curtain was found this summer when Jen at Rambling Renovators posted her mood board for a modern farmhouse bathroom. That was the impetus to finally finish the rest of the bathroom.

Are you ready for our most dramatic before and after yet? 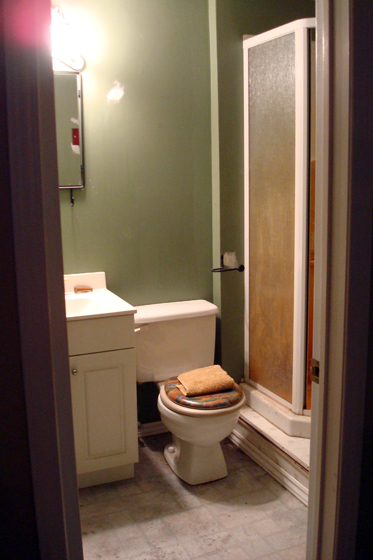 We called this the psycho shower.

It was tiny, orange, and for some reason built up on a platform. Everything was just all around gross.

But no more. This is definitely not a psycho shower. 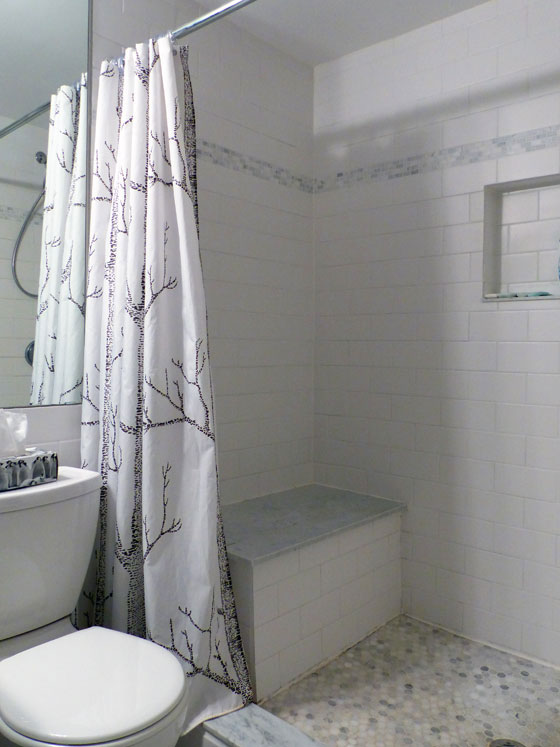 Gross was also the theme for the sink and vanity.

But with a good cleaning and a new faucet, they were redeemed.

Above the sink we started with a small mirror, an off centre light and a random vent. If I’m recalling correctly, I think the vent was an access panel for either plumbing or electrical. It was not actually acting as a vent.

After reframing and reinsulating the whole exterior wall, we held our breath and hung a huge mirror. The light fixture, which is centred over the vanity, sits on top of the mirror.

Along the way we fixed our exhaust fan issues, including evicting the snake my Dad discovered in the vent. 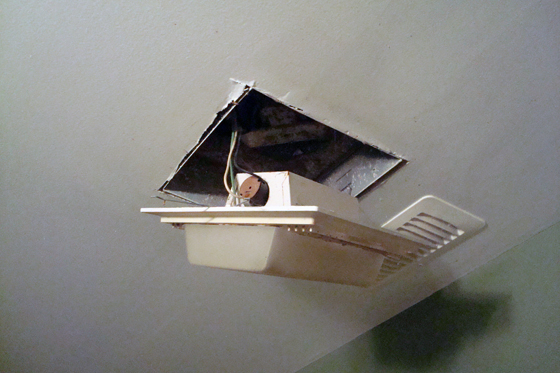 Disposed of the old toilet including its cushy illustrated toilet seat.

And added all kinds of storage by bumping out a small shelving area.

Aside from the bumpout, we kept the layout the same. But what a change.

Looking back at those before pictures I can’t believe we bought this house.

I’m so proud of what we were able to do with this bathroom, though. This was a huge DIY for us, and really pushed us–tiling that shower was a daunting task that still has me questioning whether I ever will tile again.

The design was a stretch for me too. Four years ago, dark colours weren’t as popular as they are now. Taking the plunge to paint a small windowless room black was a bit daunting. I love the black and white design so much and how it and all of the other little touches came together.

I’ll be back soon to share all of the details on this little bathroom.

Is there anything you’d like to know more about? Feel free to leave a comment, and I’ll do my best to answer it in the next post.

6 thoughts on “Basement bathroom before & after”