Maple syrup. Sap, sugar, sweetness–so much goodness. Our maple syrup making this spring has been great–except for one incident that can only be described as terrible.

I try to be a positive person, so we’ll start with the good.

We tapped five maple trees at the start of this month (about two weeks earlier than last year), and we are having such a good run of sap. Warm weather the first week of March brought 30 litres on a good day–way more than last year.

We were a bit overwhelmed. We have only so many large containers to store sap and the fridge was full of food with no space for sap–thank goodness for the cold cellar. We’re low tech syrup makers, so we boil all of our sap on our stove, which takes a long time. Getting 30 litres of sap down to syrup on an average weeknight has made for some very late nights.

But right from the start the syrup was great. Our first run gave us a bit more than 3 litres of very light syrup. (Syrup gets darker as the season progresses. I only photographed our first 1.5 litres).

A cold spell put the run on hold for a couple of days, then we started again and got about 80 litres of sap over last weekend. When we finished our full weekend of boiling on Sunday night, we had 2.5 litres of incredibly sweet syrup–magic. (See how it’s darker than the first run?) 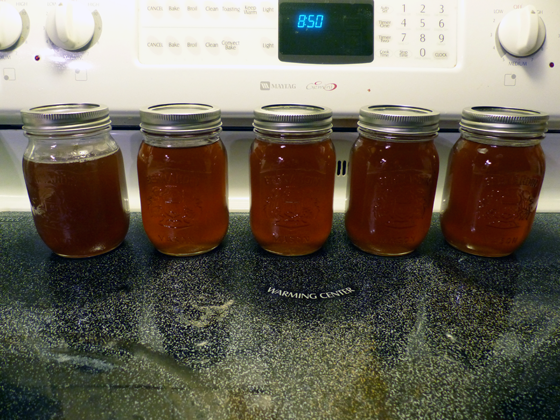 The run continued into the start of this week, and by Tuesday evening we had about another 80 litres of sap on its way to syrup.

And then things took a turn.

Early Wednesday morning–very early, 1 am early–something woke me up. A couple of seconds later, the smoke alarm went off. Matt–and a whole lot of smoke–were in the kitchen when I opened the bedroom door. In fact, the smoke was absolutely everywhere. Syrup was pretty much everywhere too.

Matt sent the smoking pot outside, and we started sopping up the burned syrup. I’m not quite sure how to describe the next hour. Sticky. Smokey. Smelly. Not how you want to spend the time between 1 and 2 am. Those all apply.

We pulled the stove out of its spot so that we could mop behind and underneath. I mopped again the next morning before I went to work to deal with the residual stickiness. We scraped the stovetop as much as we could but there’s still a black ring of burnt syrup. I’m sure syrup is behind and under the cabinet, but I’m not moving that. The house still smells like burnt sugar three days later. The charred pot is still sitting on the lawn. 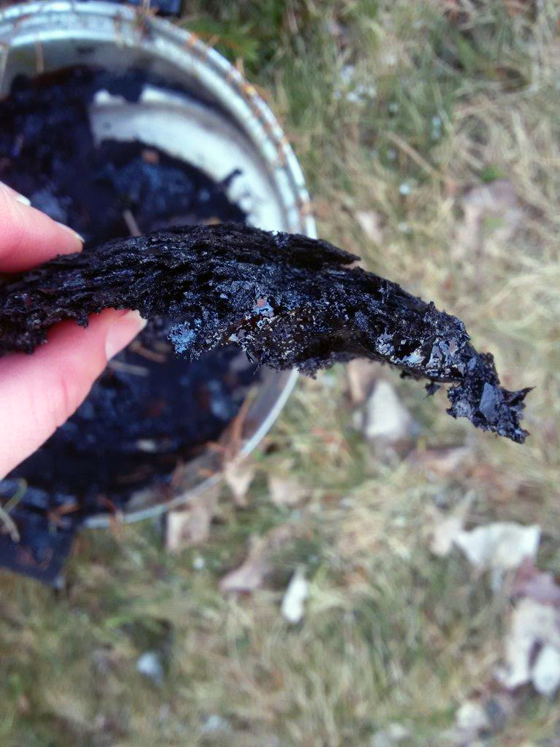 At the final minute when sap turns into syrup–around 219 degrees Fahrenheit–it gets foamy and bubbles up in the pan. We had both accidentally fallen asleep and missed this magic syrup moment. So the bubbling and foaming accelerated until it took over the whole stove and a portion of the kitchen.

Our frustration at losing so much syrup and so many hours of work is significant. However, we completely recognize that we only lost syrup. The red coals of charred sugar that I saw on our stove when I first entered the kitchen on Wednesday morning remind me that our loss could have been much, much worse.

We’re going to try again, though. Matt insists that we not end our syrup season this way. After sub zero temperatures for the past few days, the sap started running again yesterdays\ afternoon. We have a container of sap that will go on the stove this weekend.

And we have a new plan that all boiling stops at midnight, whether we have syrup or not.

But more sweetness ahead.

6 thoughts on “Sweet and sour saga of syrup making”