One of my former bosses used the phrase “even better if.” As in, “We just finished this big project, and it went really well. But what are our even-better-ifs?” It was a great way of looking positively at areas for improvement.

Last week I posted one of my renovation regrets and asked other people to share theirs. Sarah in Illinois immediately thought of one at her house. But instead of calling it a regret, I’m going to call it an even-better-if. Because she and her husband Steve did make lots of improvements to their kitchen. There’s just one little spot that could be even better.

Early when Steve and I first started dating he made the decision to renovate his kitchen. Both of us worked on expanding his small galley kitchen into an existing dining room. We removed a wall, relocated all plumbing and electrical and more than doubled the counter area.

However, it wasn’t until we were really using the newly expanded kitchen that we realized we had a design flaw.

We made a small walkway to enter and exit the kitchen and although this is plenty large enough to walk in and out, we did not realize until much later that this opening was the prime “hanging out” spot. There is always someone standing at this opening. 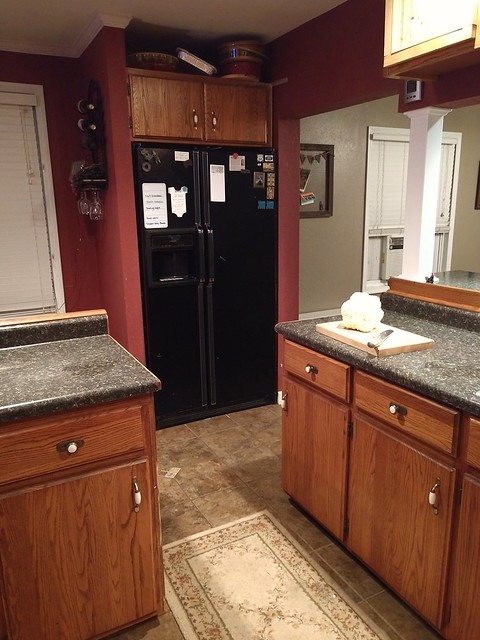 This is the ideal section of counter top to do meal prep because it is so close to the refrigerator. If you need to enter or exit the kitchen or reach the refrigerator, you will have no choice but to squeeze by someone standing right in that spot.

We have considered re-configuring the kitchen but since we laid all of the floor tile in the room around the cabinets, this is a much much larger project than we want to tackle at this time.

This is an instance where we really should have lived and worked in the space before making final decisions. We learned our lesson and hope we have fewer renovation regrets in the future.

Argh. I’m sure that’s frustrating, Sarah. Matt gets super bugged when people are in his way when he’s cooking. Most of the family has learned to steer clear! Hopefully you can enjoy the other fixes that you did make. More counter space is always good.

5 thoughts on “Renovation regrets in Illinois”