As I mentioned yesterday, the more we looked at the water system at the farm, the more problems we found.

Just a basic fix would have involved:

We would use the existing well and the pump system would stay in the barn. 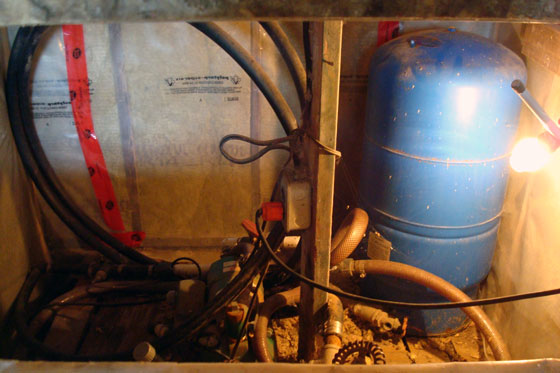 A view inside the old “pump house” in the barn

The whole system would still not be up to standard, either for the Ministry of the Environment or for us.

We quickly came to the decision that fixing the problems was not good enough. We chose to start from scratch.

The first step was a new well. 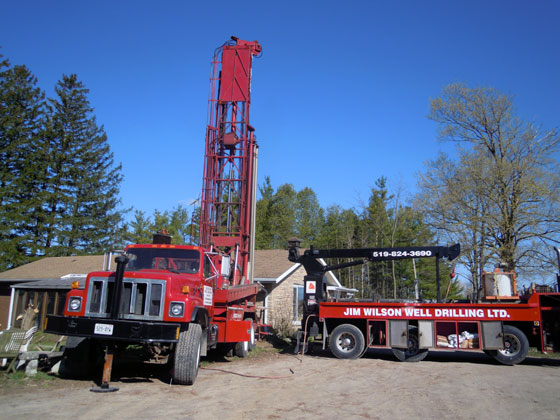 The drill rig in place beside the house

Our new drilled well is 75 feet deep with a production level of 25 gallons per minute–a really good depth and a really good rate (as opposed to our old 25 foot deep “non-standard homemade” well). It’s right next to the house meaning we have much better water pressure and most important of all it’s up to Ministry of the Environment standards.

My Dad, who was supervising the well drilling, left a note to update us on what had happened while we were at work.  After listing all of the specifications, he concluded with “Drinks is on me. Love Dad.” 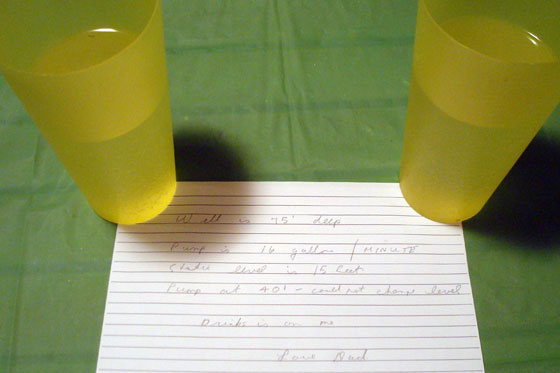 He’d filled the glasses with water directly from the new well. I took a sip, but Matt refused the sample until we had the treatment systems installed inside the house.

Inside the well, we have a new high-efficiency submersible pump, which is much better than the old jet pump that was in the barn. The pump feeds into a constant pressure system in the house. This means that our water pressure is steady no matter how many taps or appliances are running, and the pressure is comparable to what we had when we were on city water. 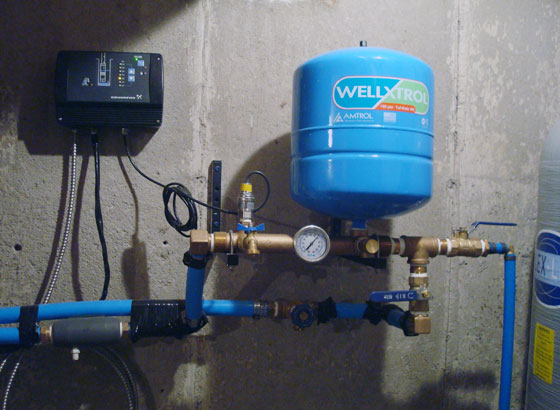 The constant pressure system includes an electronic controller (the black box above) and a cushion tank (blue) with a brass pressure log manifold assembly.

Next up in Operation H2O were the treatment systems.

As soon as the new well was drilled and the water was clean, our contractor took a raw water sample to determine exactly what treatment we needed. High iron content was a major issue with the old well, but no one knew whether that would continue with the new well.

It turns out that it did, so we installed a high efficiency, high capacity, chemical free air injected iron removal system. The air that’s injected oxidizes the iron (basically turning it to a solid particle–rust), and then the filter traps the rust and removes it from our water. In addition, we got a new softener–this one is actually connected!–and an ultraviolet sterilizer system.

The UV system is for bacteria, which is not likely to be an issue given our new well. However, it’s possible that the water table could become contaminated from another well in the area or some other source, and now we’re protected. 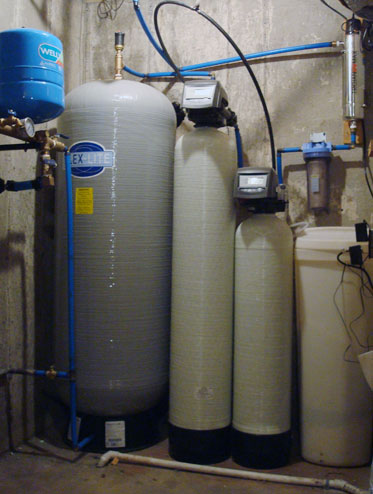 From left to right, we have the blue cushion tank, a big retention tank for the iron, the iron filter, the water softener mineral tank and the brine tank which we fill with salt for the softener. The UV filter is mounted on the wall above the brine tank.

The final piece of the new water system was a reverse osmosis drinking water system. This is not a necessary piece of equipment, but Matt and I decided to go for it. Between the two of us, we drink a lot of water. Because of the salt used in our softener, the water in the house has higher levels of sodium. It’s safe to drink, but we definitely don’t need more sodium in our diets.

The reverse osmosis system is made up of a series of filters and a 14.4 litre tank that all sit in the cabinet under the kitchen sink. Our treated, softened water runs through these filters and then is pushed through a fine membrane that removes all of the salt and any other particles or impurities that might be in the water. 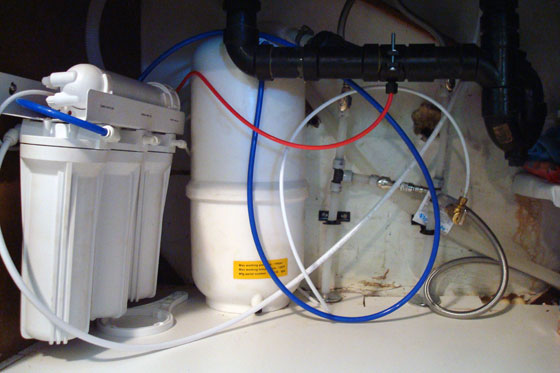 The storage tank is connected to a small faucet on the back of the sink where we have drinking water on demand. 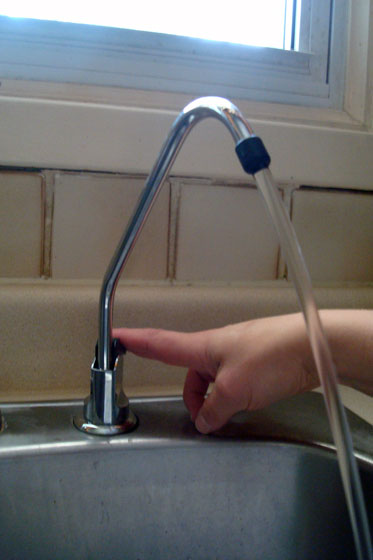 While all of this work on the water system inside the house was happening, we took advantage of having the contractors on site to make a few upgrades to the outside system as well. The old water line that brought water from the barn into the house was reversed so that we can run water from the new well to the barn. As well, we added an exterior hose at the drive shed by connecting a new line from the house and trenching it across the driveway. 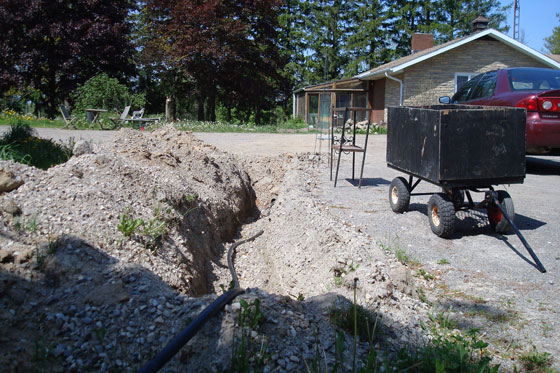 We’ll backfill the rest of the trench once we finish connecting the hose. How do you like our barriers so that no one drives into the trench?

Redoing the whole water system for the farm is a big project, and it was not in our original plans. However, the results make it worthwhile. With all of the equipment in the house, we don’t have to rely on a light bulb to keep the pump from freezing. We have good water pressure, no more iron or hardness and great peace of mind from knowing that everything is clean and safe.

"I am not the busyness of my thoughts." This quote from @richardwagamese connected with me as soon as I read it.
This mess represents so much progress and big steps towards our dream of what this house can be. Garage construction is underway. So much progress (and so much mud) has been made already. A full update (including more photos of the cutest supervisor/worker) is on the blog at the link in my profile.
On a whim, I decided to tap our trees a few weeks ago. It turned out to be exactly the right time. Just a few days later, the sap started to run.
Did you know we have an indoor pool? But not for much longer. We're building a garage, and it's going in the pool. I am so excited.
Nine years ago today, this farm became ours. Nine years ago, I started to live one of my dreams. It’s been a pretty amazing opportunity.
I’m almost a week late which feels about right since that’s approximately how long the celebrations have lasted. Happy 3rd birthday to our girl. A caring, sensitive, inquisitive, helpful, bright little girl. The best partner I could ask for.