It’s been awhile since I shared what’s up in the vegetable garden. Deep in the middle of summer, lots is up. As in lots of beautiful vegetables.

Looking back at my last update from the end of June, I’m amazed at how much things have grown. Here’s the tour ’round the ring.

Quadrant #1, where the first three of the five rows of potatoes are ready to be dug.

The raspberries along half the centre axis. I think that the black raspberries (the mess on the left) will be coming out to be replaced with either more raspberries or something entirely different. We have enough growing wild around the farm that we don’t need them in the garden too. And they do not seem amenable to being tamed.

Quadrant #2 which continues to be weed central as there’s nothing planted here beyond asparagus and grapes in the perimeter beds. I actually broke down and mowed this section last weekend. Let’s pretend I’m a really sophisticated gardener and we’re intentionally letting this section lie fallow this year, okay?

Quadrant #3, which also continues to be quite weedy. However, no mowing is happening here, as this is home to our watermelon, which have totally taken off (more on this below).

The other half of the centre axis is our squash A-frame. The vines are climbing! I’m very excited that the trellis seems to be working. We have baby butternuts, acorn squash and gourds.

I tried to pick a few highlights to zoom in on a little more. A few is hard, as I’m super excited about everything.

Most exciting is our watermelon. As in we actually have watermelon! They’re about the size of softballs right now, so they’re not quite watermelons, but they’re on their way.

Another vegetable that is exciting just by its presence is our yellow bush beans. Last year all of four plants sprouted. This year we have a whole row and each plant is loaded with beans and blossoms. We’re going to have more than enough beans to freeze for the winter. 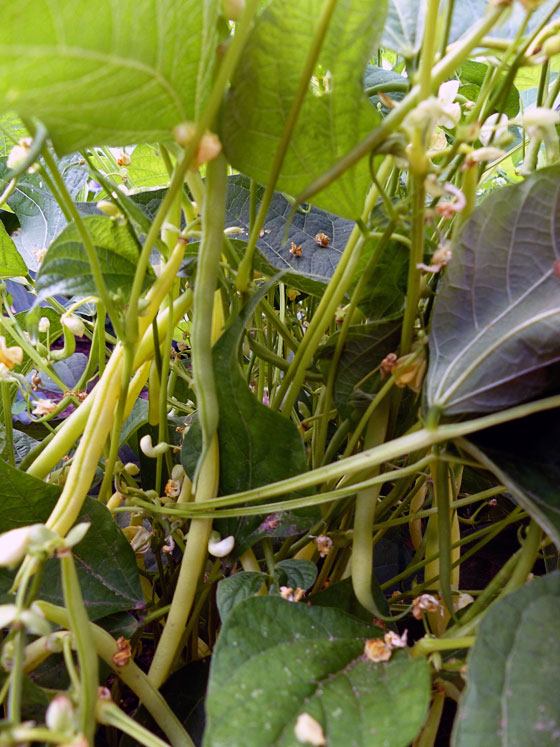 Also on their way are our Sicilian Saucer tomatoes. I picked up these seeds on a whim, so I’m not sure what to expect. The blossoms were huge, befitting the “saucer” name. We have some catfacing on the bottom of the fruits, which I’ve learned is common with big tomatoes. The fruits aren’t saucer-size yet, but I feel like they’re on their way to being quite large.

The plants that I’m watching most closely are our grapes. A few of the vines have finally reached the top of the fence, and some tendrils have even started to wind themselves around the wires.

These are the highlights, but there are a few lowlights.

I planted the bunching onions in the raised bed, which are filled with the dirt we bought this spring. The onions did not like the dirt at all. They’ve looked like blades of grass ever since they sprouted back in June. Last weekend we transplanted those wee little sprouts into the main section of the garden. They’re already looking perkier.

A few of the raspberries have been hit by Japanese Beetles. The damage hasn’t been too bad, and we have so many canes that I’m not miffed to sacrifice a few leaves. However, that doesn’t mean I’m not on a campaign against the beetles. It only took me a couple of days to get over my squeamishness at the crunch they make when I crush them.

This one may not be a lowlight, but some of the tomatoes that we purchased as sprouts are growing oddly. The plants are all the same type, but the fruit are all different sizes. Everything from the size of a marble to the size of a pingpong ball.

And then we have a few plants where the stems that support the trusses have taken a turn and branched up into “suckers.” You can see the stem looping around and up in the photo below. I’ve never seen this before. Have you? 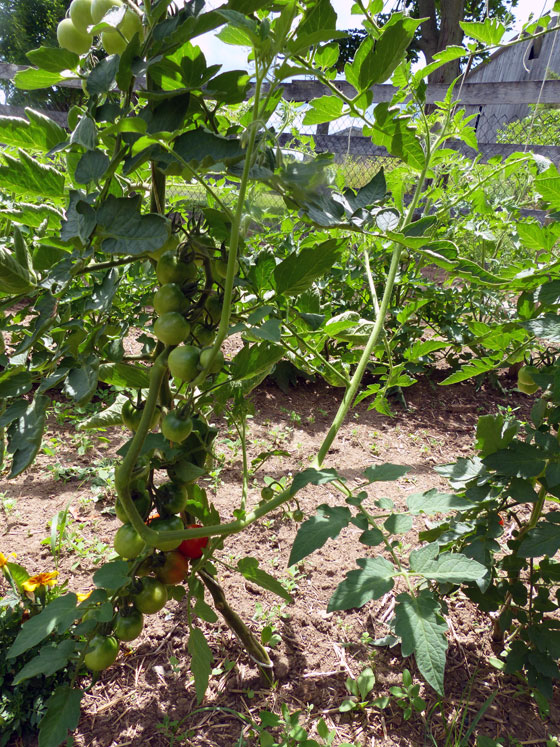 One final highlight that I have to share. As I was photographing the garden, I came across this guy in the watermelons. A frog in the garden is a good omen, right?

What we’re loving most is eating the garden–the vegetables and fruits only, no frogs. We have so much desire to cook in the summer, and our meals are so fresh and full of variety.

How is your garden growing? What fresh produce are you enjoying this summer?