I’ve never known what to do with the top of the little dresser in the nook in Ellie’s room. The dresser itself is still filled with Mama and Daddy things–tools, notepaper, stamps. Initially the top held only the lamp my grandfather made for my childhood bedroom. But like most flat surfaces, the rest of the top has attracted… stuff.

I needed a way to corral the stuff. At the thrift store, I found a shallow wooden tray. I didn’t love the colour, so I sanded it down to bare wood. (This is how we DIY around here these days.)

After the sanding, the tray looked a bit dough bowl-esque, which I loved. But I could still see the red undertones in the wood. I picked a stain (Puritan Pine) that I hoped had gold undertones. The colour wasn’t quite what I was looking for, so I slapped on a layer of grey to tone it down a wee bit.

In the nursery, we have a bunch of wood tones: golden wood floors and side table, neutral unfinished wood frames on the pictures and shadowbox, grey stain on the dresser. My slapdash approach turned out to be a pretty close match to the dresser.

The best part of it all is that now I have a spot to stash stuff–the power of trays. The tray holds Ellie’s sunglasses, a footprint we made when she was just two months old (!), nail clippers and an acorn that her Daddy picked up for her at a picnic–and soon enough she’ll be picking up her own bits and bobs.

The tray, combined with some overcrowding on Ellie’s bookshelf, was a catalyst to finally style the top of the dresser. I added her collection of Beatrix Potter books and now I’m really happy with how the dresser looks and works (although I do wish the figurines shelf was a titch higher). I’ll be sharing how those books magically stand upright in an upcoming post. 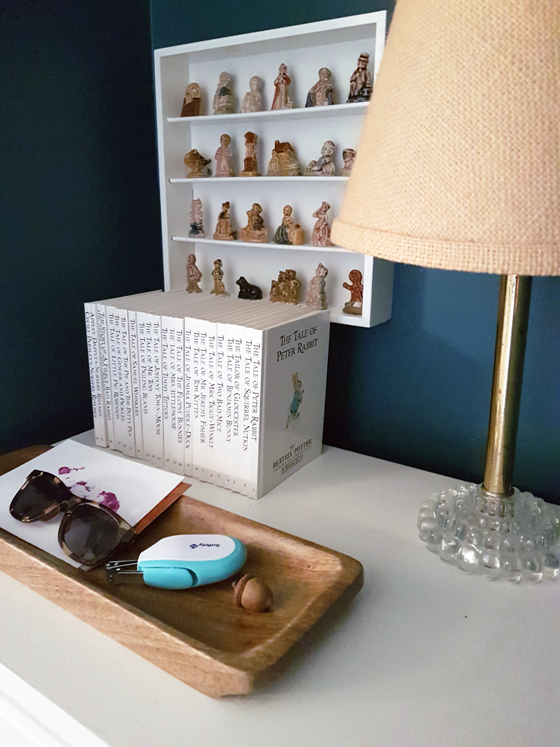 The tray is simple and small, but it’s very functional. And it looks nice too.

Any other tray fans out there? Who else has issues with flat surfaces? What bits and bobs do your kids collect?

8 thoughts on “The power of trays”