Lest you’re confused by the title of today’s post, no, Matt and I have not left the farm for southern climes. Sarah in Illinois did, and she’s come back to share her honeymoon adventures with us.

I know of no better way to break up the cold days of winter than to head south. And that is just what Steve and I did. We combined a vacation, our honeymoon, my birthday and Valentine’s Day into a six-day stay in Cancun Mexico.

We stayed at the all-inclusive Moon Palace Golf Resort and Spa. I cannot say enough about our stay. The staff was amazing, we visited with other guests from London, Canada, Norway, and a few from the States, the food was great with more choices than we could try while we were there. And of course, the drinks never stopped.

The only thing that I would change was that we had two days of cool weather and overcast skies, but of course, there is nothing that can be done about that. And as they say, a bad day at the beach is better than a good day at work, right? 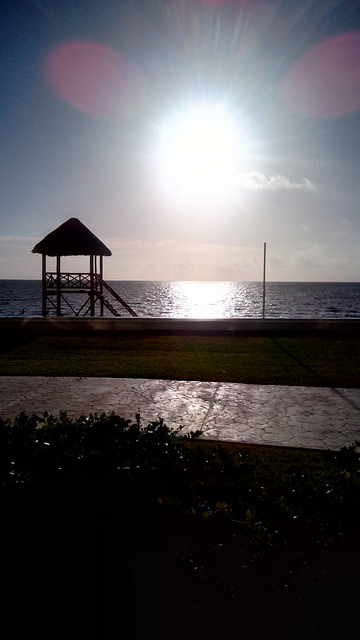 The view from our room

Our room was ocean front and included a jacuzzi. Believe me when I say, I am not used to that kind of luxury. We spent each day almost the same way. We woke up and went to buffet breakfast where we tried some new things but preferred the made to order omelets. We found some empty lounge chairs on the beach and our biggest worry was how long until the waitress came back with our drinks and what should we have for lunch.

Birthday breakfast: made to order omelet and a Bloody Mary!

The area had several sites that we could visit. And we discussed going to see Cozumel or Playa del Carmen. But Steve and I have had a lot of stress the past two months, and we both decided that all we wanted to do was soak up the sun (when it came out) and listen to the waves crash. It truly was relaxing.

On Saturday, my birthday, the sun was again hiding and so we went to the “Hotel Zone” where there were plenty of shops. We bought souvenirs for family, and Steve bought me a new purse. We stopped for cervesa (beer in Spanish, the word that Steve learned first at Hooter’s) and then headed back to our hotel. 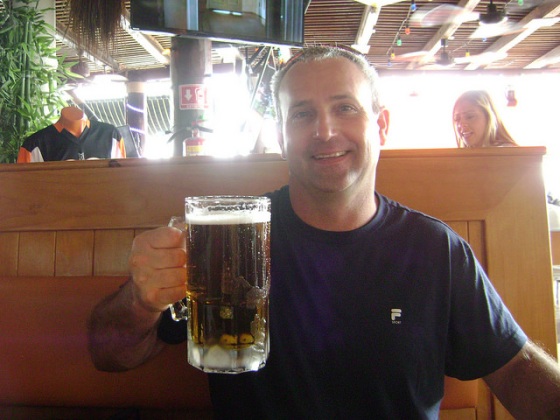 We told the hotel that we were on our honeymoon, and they gave us a complimentary dinner on the beach. We didn’t know what to expect, but we were so extremely surprised. Dinner was salad, onion soup (that was amazing) and then filet mignon. We had wine and champagne. Yes, the hotel outdid themselves.

On our last full day the sun was in and out of the clouds all day. We spent some more time on our chairs but decided to go do something.

The hotel had small two-person catamarans that we took out on the ocean. Neither of us had ever attempted to sail anything before so there was a bit of learning curve, and we didn’t always agree on how to do it, but after a while we did really get the hang of it.

The next thing we tried was stand up paddle boards. Oh my goodness that was hilarious. I think we had both had too many cervesas to attempt anything with balance. But we were in shallow water with life jackets on so the only thing we hurt was our ribs from laughing.

Later in the afternoon we rented a sea-doo and followed the guide out in the ocean. We went a long, long way out into the ocean, where we could barely see our hotel back at the beach and the guide had us get off on a shallow sandbar. It was so cool to be so far out in the ocean just standing in shallow water.

Our final dinner at the resort was at a Brazilian restaurant. We both really stepped out of our comfort zone to try it. The waiter came around to our table repeatedly and offered Canadian bacon, turkey, flank steak, chicken, Brazilian steak and I am not sure what else.

I will admit, it wasn’t our favorite meal, but we were happy that we tried something new. And we ended the dinner with Key Lime pie for me, cheesecake for Steve and Mayan coffee, which came with a little show of fire, and alcohol. It was so much fun. I am sorry that I didn’t take more pictures, but I am glad I enjoyed it first-hand rather than worrying whether I caught the right shot.

Steve and I both swear we are not going to take four years until we go on our next vacation. It was long overdue, and completely relaxing. I only hate that we came home to blowing snow.

What a quick way to end the glow of a beach vacation! 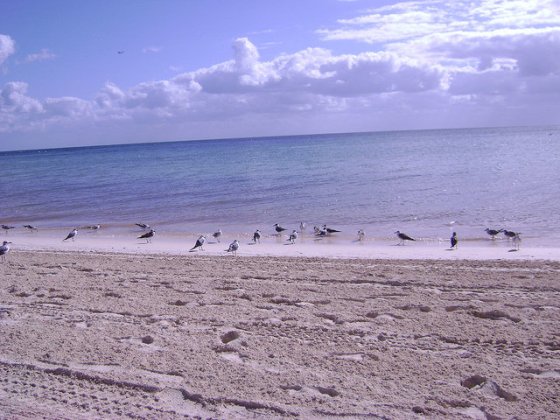 Where do you like to take your vacation? Any beach lovers out there? Anyone been to Cancun? Have any suggestions for our next trip?

Sounds wonderful, Sarah! Your Valentine’s Day was a definite contrast to our -20ºC temperatures. It’s been a few years since I’ve visited a beach in the middle of winter, and you’re bringing back some good memories. For your second honeymoon, I suggest Costa Rica (our choice for our honeymoon). Heat, sun, beach, ocean and some jungle adventure tours. It was a lot of fun.

2 thoughts on “A Mexican vacation”