Thanks everyone for the well wishes on my last post. Freelancing is an exciting venture for me, and I’m very grateful that I’m able to take this step.

This week is garden week on 129 acres. I’ve shared some of our highs and lows already. As the season is progressing, we have more news to share. Harvest is still coming on very (very) slowly.

Matt was looking for squash this weekend. We’re easily at least a month away from those, I would guess.

I did reap a bumper crop recently, but not a food I was looking for. I finally picked our Japanese beetles. Definitely won’t be eating these.

Our raspberries have been the worst victims, although the grapes have also hosted a few of these munching monsters. I’ve even found a few on my laundry after it’s been hung outside. Not impressed. 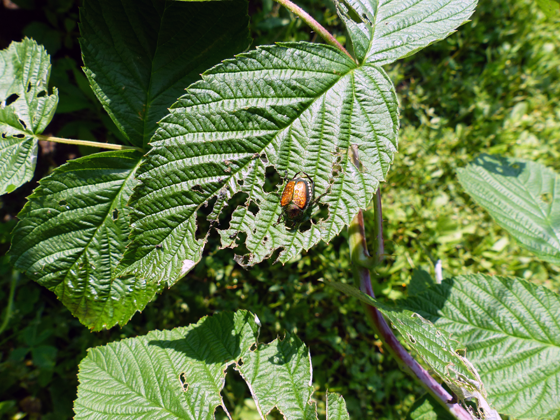 It’s extra insulting when they’re procreating right in front of me. But the reward is killing two or three at once. 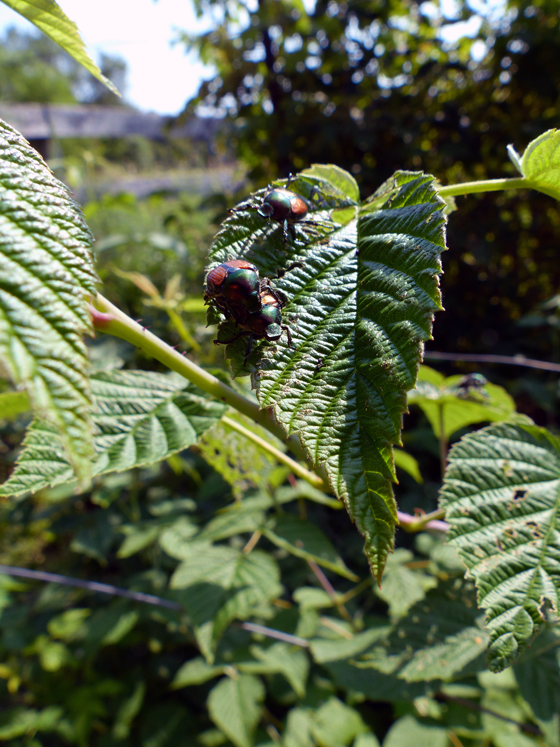 I had read that the most effective technique was to handpick them off the plants and drop them in a bucket of soapy water. I think a couple of years ago I was squeamish to touch these guys. Not anymore. I walked up and down the rows and didn’t hesitate to flick the beetles I saw into my bucket.

The film of soap on the water kept them in the bucket–aside from when I tripped over a rogue weed and sloshed water and beetles over the soil.

I picked for a couple of days in a row and eventually noticed a decrease in the number of beetles I found. The result was a small bucket of grossness–which I did not count. 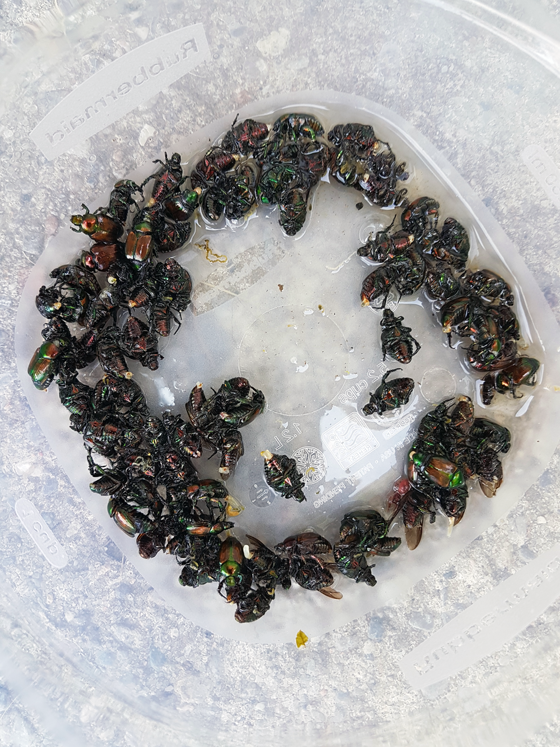 I think in future years I need to be motivated to pick these guys as soon as I spot them. It would likely decrease the chances of progressing to a full infestation.

Do you have Japanese beetles at your house? Or another pest that you’ve been battling? Any tips for dealing with beetles?

4 thoughts on “Battling Japanese beetles in the vegetable garden”

"I am not the busyness of my thoughts." This quote from @richardwagamese connected with me as soon as I read it.
This mess represents so much progress and big steps towards our dream of what this house can be. Garage construction is underway. So much progress (and so much mud) has been made already. A full update (including more photos of the cutest supervisor/worker) is on the blog at the link in my profile.
On a whim, I decided to tap our trees a few weeks ago. It turned out to be exactly the right time. Just a few days later, the sap started to run.
Did you know we have an indoor pool? But not for much longer. We're building a garage, and it's going in the pool. I am so excited.
Nine years ago today, this farm became ours. Nine years ago, I started to live one of my dreams. It’s been a pretty amazing opportunity.
I’m almost a week late which feels about right since that’s approximately how long the celebrations have lasted. Happy 3rd birthday to our girl. A caring, sensitive, inquisitive, helpful, bright little girl. The best partner I could ask for.