My thrift store lamp that you met on Friday had a lot of things going for it, especially after its spray paint makeover. However, there was one thing missing that I didn’t notice until the very end: the harp.

The harp is the little bracket that goes around the light bulb and holds the lampshade.

I admit, I was a little intimidated by the prospect of installing a harp. I hear about a lot of people rewiring lamps, but I’ve never attempted that myself. It turns out it’s not hard. In fact, I just started trying to take the lamp apart and was able to figure it out pretty much on my own.

Step one was to remove the socket from the lamp base. It just unscrewed, and the cord was loose enough that I was able to pull it out a little bit. 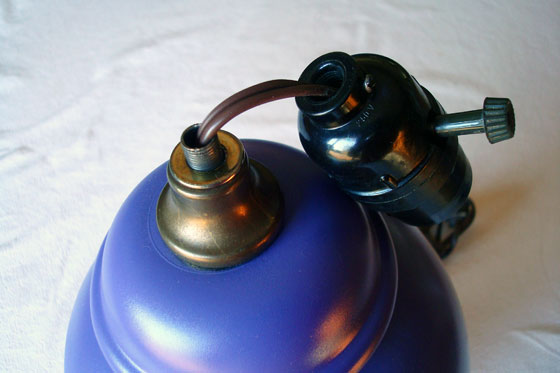 The wire was still buried deep in the socket, so I started trying to figure out how to access it. A close examination revealed a seam in the middle of the socket. You can see it partially opened here. 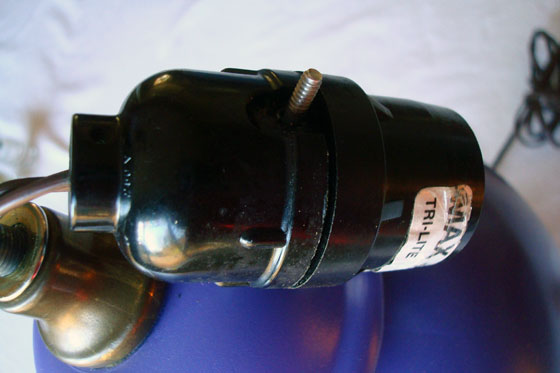 The socket easily unscrewed, and I could see where the wires attached to two screws. I could also see a really intimidating knot. Gulp.

A couple of turns loosened the screws enough to unhook the wires. Quick tip: I marked which wire went to which screw (one’s gold and one’s silver) by straightening the gold one and leaving the silver one hooked.

I was really, really hoping to not untie that knot, but in order to remove the bottom part of the socket–never mind putting on the harp–I had to. With the knot untied, the socket easily slid off and the harp bracket easily slid on. 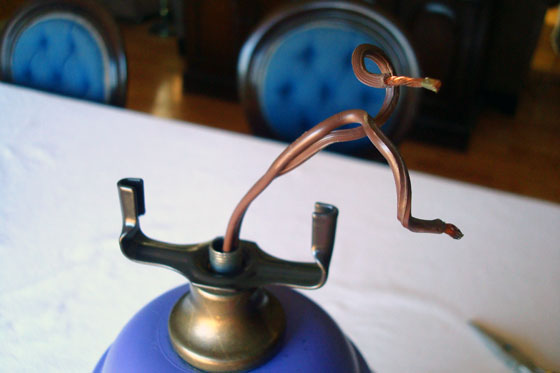 After that, it was a (relatively) easy process of reassembling the socket. I slid the bottom part of the socket back into place. I retied the knot. (Okay, this was a bit complicated.) It turns out the knot is called an underwriters knot. I watched this animation a few times as I was tying my own knot. I hooked the wires back over their screws, and then screwed everything back together. I had a reassembled lamp that now included the bottom part of the harp. 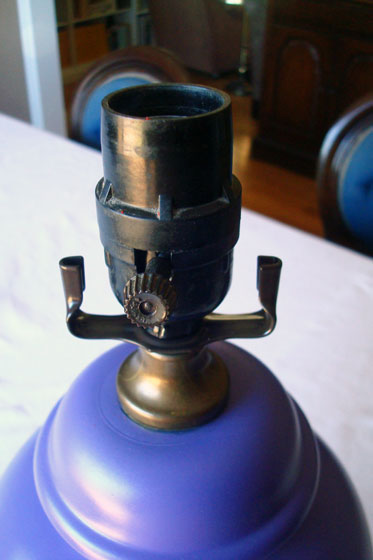 The upper part of the harp slid onto the bottom bracket and I gave myself a congratulatory pat on the back.

And then I had to choose a lampshade. Last week I asked for your input, white or grey. So what did I end up choosing?

I went with the grey. It was pretty much the universal favourite last week, and I decided that I liked its flared shape best. 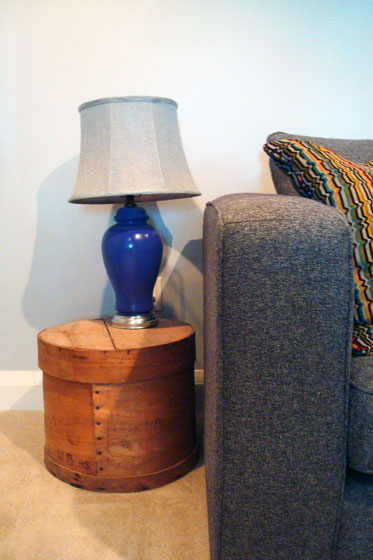 And another detail on the basement comes together. Slowly but surely I will finish this space.

Have you ever rewired a lamp? What DIY projects do you find intimidating?

Every day at the farm is full of special, simple moments. I do not take this life for granted. Especially when the world feels like such a heavy place. I see extremists with power imposing their vision on society–regardless of the beliefs citizens hold. People who hold power are using old and extremely narrow thinking to make decisions for today.
Last week I read Pastoral Song by James Rebanks @herdyshepherd1. So much of what he wrote connected with me. But this passage hit hard, and I want to share it here on Earth Day.
In the future when I talk to Ellie about feeling the onset of climate change, I think I will start with the winds. The winds are so strong and fierce. I feel like the winds are harbingers of more harshness to come.
A decade. We’ve been here at the farm for a decade.
Welcome to our family Cigo.
Saturday was a beautiful, sunny, cold day. We spent most of it at the pond immersed in the magic of the farm.