A big to-do on the garden task list is now done. We finally have a hose at the garden… and I’m so happy to cross this one off the list. 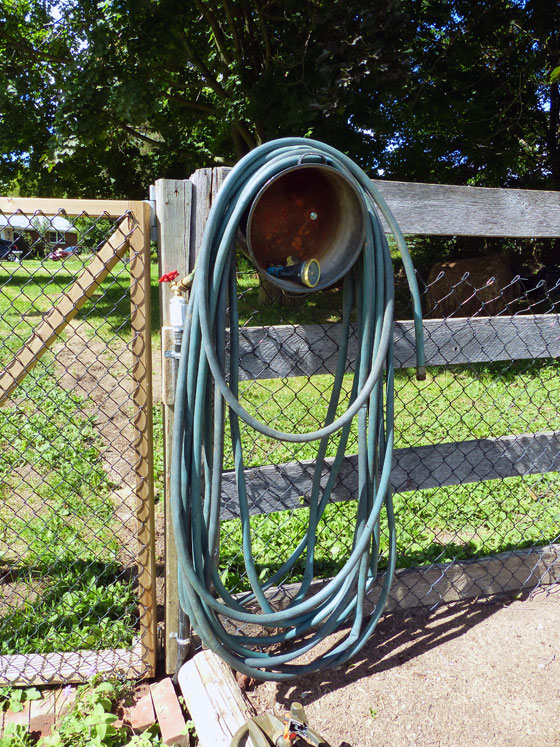 With the lack of rain we had this summer, we watered the garden a lot. However, the closest hose was at the driveshed. That was three hose-lengths away. I had screwed the hoses together back in the spring, and most of the time we kept them laid out across the yard. But any time I had to wind them up (like every time we cut the grass) it was a heavy haul.

Adding a tap at the garden was one of my Home Goals 2016. I already shared a bit of the misery that was digging the trench from the driveshed to the garden (ground so hard, summer so hot, rocks and roots so many, garden so, so, so far away).

When I measured the trench, it came out a bit more than 100 feet. I spent a week visiting various home improvement stores and then specialty plumbing suppliers trying to find someone who would sell me 110 feet of irrigation pipe. All I could find was 100-foot or 400-foot coils. Ugh.

I bought 100 feet and crossed my fingers that we could splice on a small extra piece we had at the farm already and still make it to the garden.

But it turned out I was worried for nothing. When Matt and I unrolled the pipe and laid it in the trench, it easily reached the garden. Thank goodness for small wins.

The other thing I was worried about was our plumbing abilities. I had a plan, but I wasn’t sure if it was actually going to work.

We dug down to the waterline that ran to the hose at the driveshed. After turning off the water, I took a deep breath and cut through the waterline with the hacksaw. So much for my brand new work gloves. 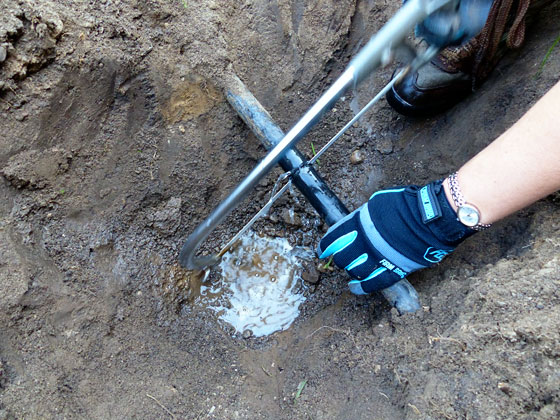 Then we inserted a T. A note about these connections. They fit super, super tightly. We boiled the kettle and then Matt poured the hot water over the pipe and that softened the plastic enough that I was able to wedge the fitting into place. The clamps on either side provide extra insurance to hold everything together and prevent leaks 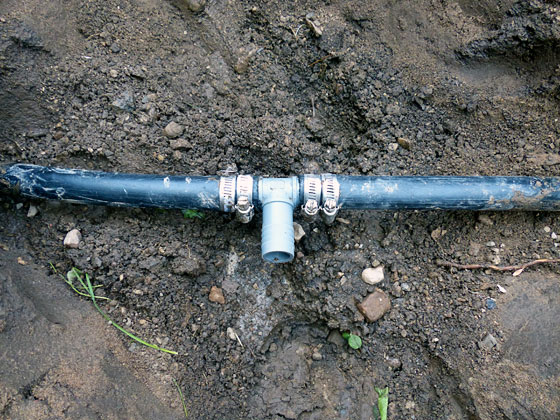 From there, it was easy to connect our new 100 feet of pipe.

At the garden, the pipe sneaks under the brick threshold at the gate and up the post. Look how much pipe we had. Exactly the perfect length. And look at the water flowing. We did it! And there are no leaks! Big wins all around!

Backfilling the trench was much easier than digging it out. Wiley helped which was huge.

Baxter did not help. In fact he staged a sit-in (lie-in) to protest when Matt started to put the sod back down. “Dirt is good, dude.”

The finishing touches were clamping the waterline to the fence post and then installing a hose hanger.

Rather than a typical hanger, I wanted to try a metal bucket. I’ve seen a few other people do this, and I figured it would give us a place to stash nozzles or maybe even some garden tools.

Again, I spent some time running around to various stores trying to find the perfect bucket. Then I remembered a rusty old canning pot–one of our many gifts from previous owners. I knew there was a reason I didn’t throw that out.

I drilled a couple of holes in the bottom and then bolted it to the fence.

Then I dragged the hose out to the garden one final time (except for seasonal shutdown, but don’t burst my bubble, okay?) and coiled it up.

Such a great addition to the garden. And this is actually our final to-do on our garden to-do list. This year has been all about adding the structure (raised beds, trellises, perennials) and functionality (gate, trellises, hose) to the garden. I think all of this is going to make a huuuuge difference next year.

The other thing that is going to make a huge difference–and that we have yet to do–is clean up. We have a whooooole bunch of weeds that I want out of there before winter sets in. That’s still a few weeks away though, as harvest is still going strong.

Tomatoes this year come in 2 sizes and 2 sizes only: gargantuan or mini #growyourown #harvest16 #goodthingsgrowinontario

How is your garden growing? Does plumbing make anyone else anxious? How do you handle irrigation in your garden?