I’m loving my newly decorated office so much. There has been sewing, crafting and working–it’s such a fun inspiring space. Even better, everything is still tidy and organized. I’ve been wanting to do a video tour for a little while, so I thought the office would be a good place to start.

Usually in my room makeovers I post a before and after. However, the office was such a blank slate that the before is pretty basic and blah. As well, I didn’t make any major changes so the layout–the window, the doors, the closet–are all the same. Comparing a before and after doesn’t seem very dramatic in my opinion. 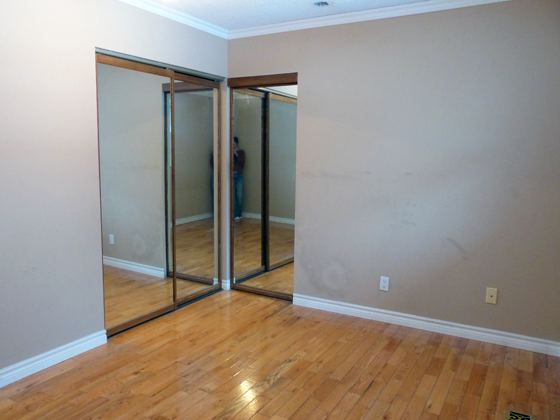 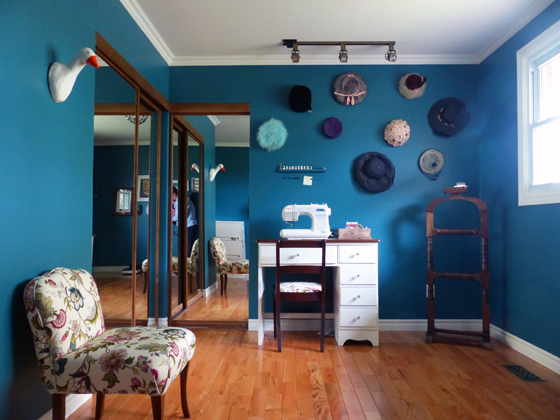 However, there were befores and afters for some of the elements in the room, so I thought today I’d share some of those as well as the video.

The video tour gives you a good look at the weird little nook just inside the office doorway. This spot’s makeover started a few years ago when I removed the weirdly high shelving, built a little dresser and hung a bulletin board. What could have been a really awkward part of the office has become a really functional command centre. 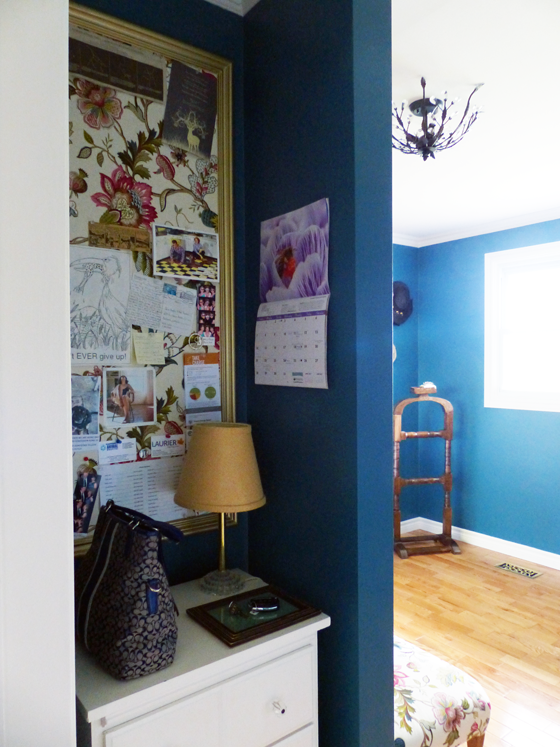 The search for furniture that fit the little nook was long and challenging. I wanted something tall, but it had to be narrow and not too deep. Plus, as usual, it had to be cheap. I ended up finding a pair of nightstands that fit the space perfectly. And when stacked on top of each other, they made a tall narrow dresser that holds everything from tools to notepads. 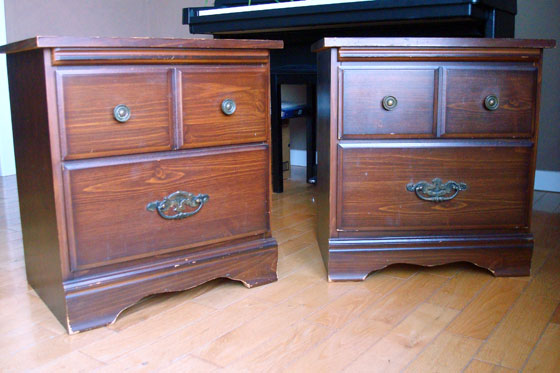 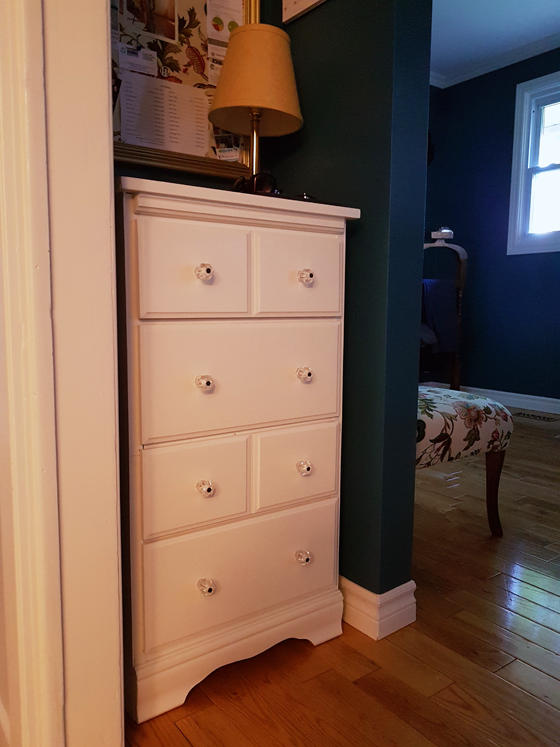 I’m going waaaaay back in the archives for this before picture. This was what the office looked like when we first bought the farm. The green desk (along with a lot of trash) was left by the previous owners, and I drafted it into serving as my sewing desk. When it came time to makeover the office, it was more than time to makeover the desk too. With fresh white paint, rich dark stain on the top and sparkly hardware on the drawers, it’s become a bright, feminine piece of furniture. 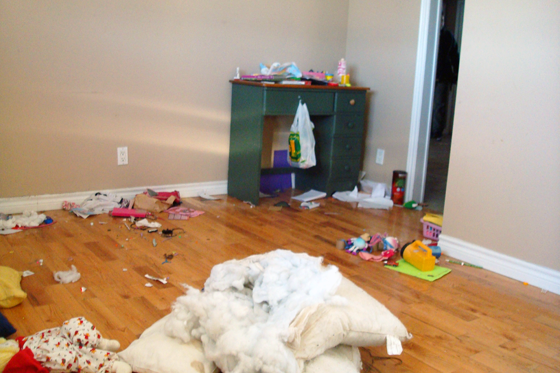 The hardest working piece of furniture in the office is the china cabinet. It holds so much stuff while keeping it all nicely organized and allowing space for display. 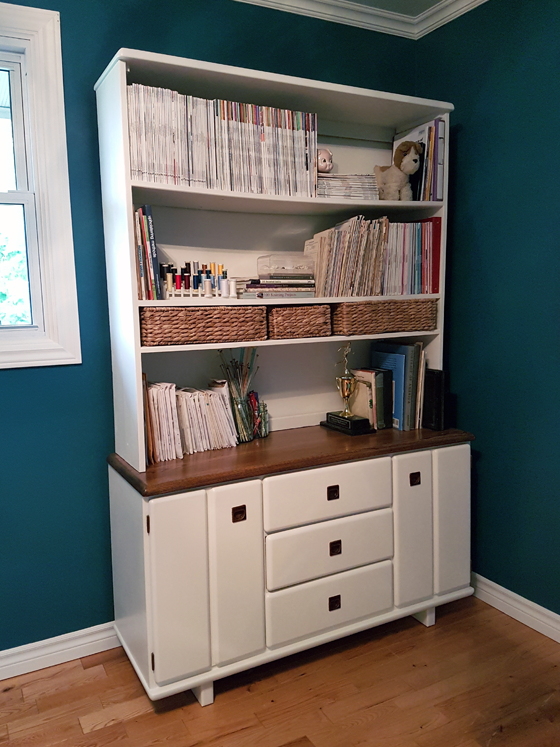 The slipper chair was the most complex reupholstery project I’ve tackled. I love that I’ve been able to give this family heirloom a new life in our home. 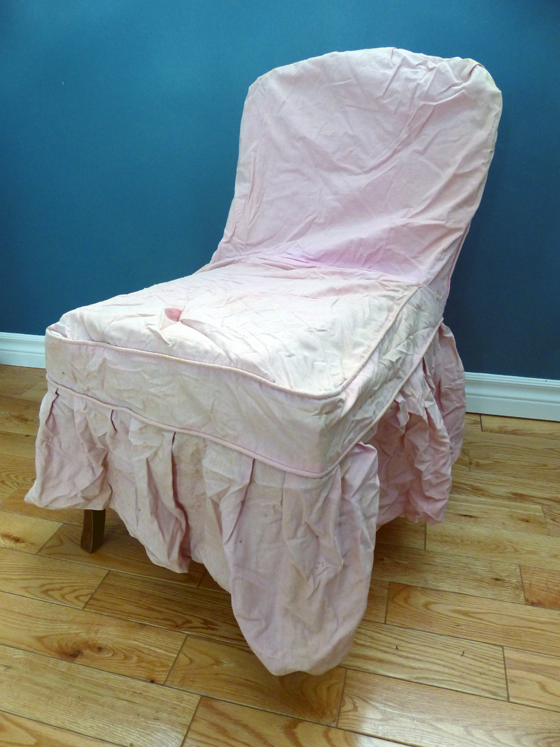 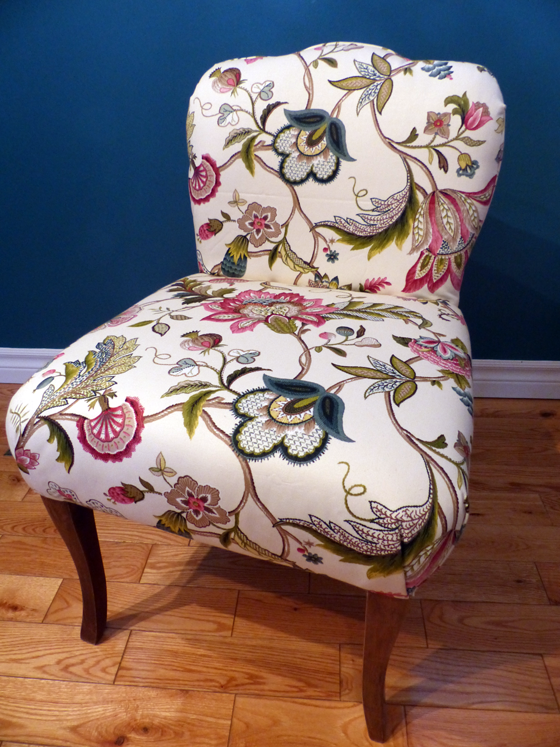 The office ended up taking awhile–five years since we moved to the farm. I tackled little projects here and there before finally diving into the big makeover at the start of this year. I’m so happy that everything has finally come together in one finished, functional and pretty space. 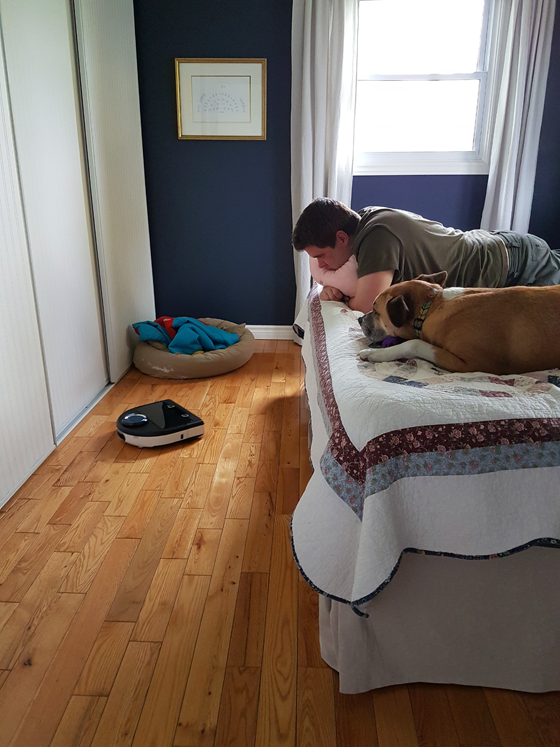 My vacuum sagas are well-documented on this blog. There was the debate about whether we should get a Dyson. Then we answered that question when we went with Sebo. Most recently, I realized that no matter what kind of vacuum we have, I don’t want to push it around, so I started musing about robot vacuums.

Well, we have entered a new chapter in vacuum-dom. The robot era. That’s right. We took the plunge and bought a robot vacuum.

I don’t think our floors have ever been this clean.

The other weekend, we started the vacuum and then went out to cut the grass. We did two chores at once. On Friday, as Bax and I headed out for the day, I turned on the vacuum. I wasn’t even home, and my house was being cleaned. Magic.

When I’m home, I have so many things that I want to do/feel like I have to do that I wish I could be in two places at once. Now I basically can be.

We purchased the Neato Botvac D80–and yes, we purchased it. This is not a sponsored post. My sister has this vacuum and she loves it. She had done a lot of research to figure out which vacuum to go with and I trust her judgment, so I didn’t launch my own investigation.

Obviously, Neato is a hit, but I thought it might be helpful to delve a bit more into what works and, let’s be honest here, what doesn’t. Because as wonderful as Neato is, he does have a few shortcomings.

Horseshoe shape. I feel like this allows him to get into corners and get close to furniture. At the same time, his round back end allows him to escape if he’s in too tight of a space.

His strength. Neato is a strong little guy. We have thresholds at the doorway to each bedroom, and he bumps up and over them with no issue. The first time we put him to work, he climbed up onto the track of the patio door in the kitchen. Bumps and uneven floors are no problem.

Personality. This may seem silly, but Neato has been programmed as a “being.” He says, “Please clean my brush” rather than just “please clean brush.” I like that he has some personality and is not just a machine. (And this obviously fits in with the other furniture and equipment in our house that also has names, exhibit A, Wiley the tractor). 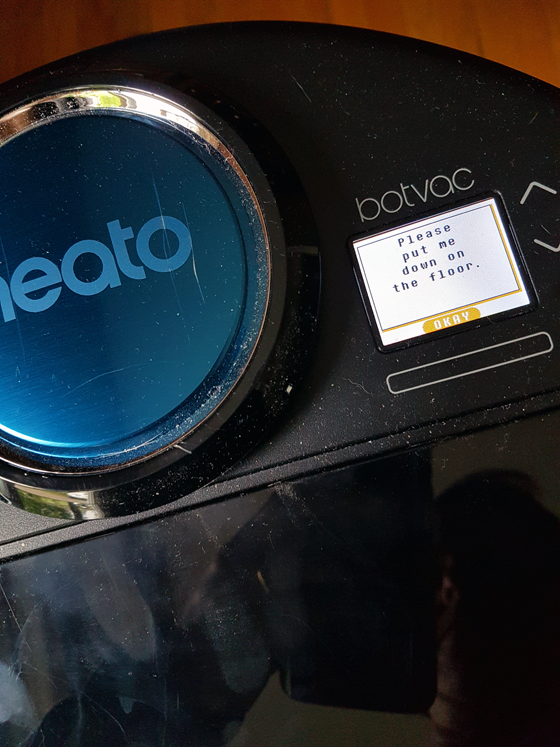 Easy to work. Neato has two buttons. That’s it. Push the Home button and he goes to work. Push the spot clean button and he does the four-foot square area in front of him. The display screen tells us what he’s doing (it’s a bit small, so the type may be hard to read for some people). The filter pulls out easily for cleaning, as do the brushes.

He works on multiple floor surfaces. Upstairs we have wood floors with the occasional rug. Downstairs we have mostly carpet, with vinyl sheet flooring in the laundry room and tile in Matt’s bathroom. Neato cleans each of them equally well and transitions between wood and rugs without effort.

He does a good job. Neato is persistent and goes under furniture, around chairs and into all of the nooks and crannies that he can fit into. These are areas where I will half-heartedly swipe the vacuum–if I bother at all.

Neato is not speedy. He moves relatively cautiously and takes a little while to work the perimeter of the room before doing the centre. Since I’m not doing it, I don’t mind. He can take as long as he wants.

Neato needs a break. Even fully charged, Neato can’t finish either the basement or the whole first floor in one shot. Whether upstairs or down, he needs a break just over halfway through. He goes back to his base, recharges, and then goes back to where he left off. (Isn’t that so neat?) Again, this extends the cleaning time slightly.

Small dirt bin. Neato is not a big dude. The dirt bin has to be emptied after every cleaning session (not the half session I mentioned above). In fact, the first time he vacuumed the basement, the dirt bin was overflowing with dog hair (don’t judge me). Now that we’re vacuuming more frequently, the floors aren’t as dirty. But I still don’t think we could do two rounds without emptying the bin. However, there are no bags to deal with. It’s easy to pop out the bin, open the filter, dump the dust and hair, and close everything back up. 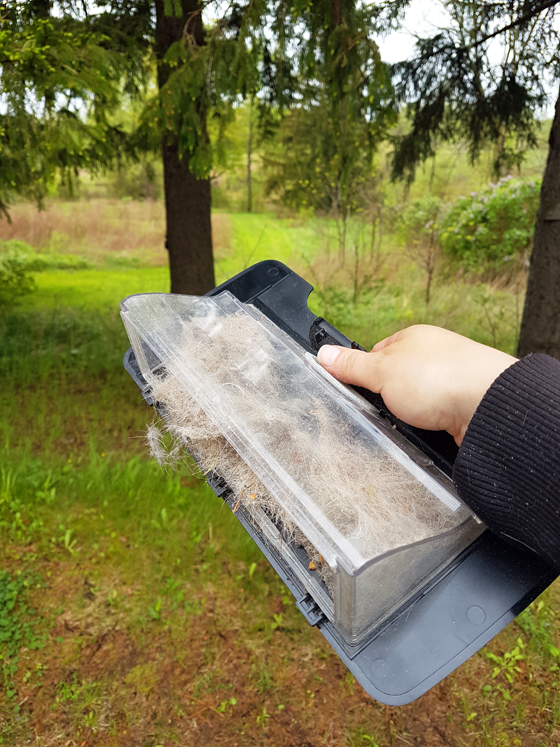 I don’t understand him. Neato’s programming is pretty impressive. I don’t know how he does what he does. But his progress or his thinking is computer, not human. At the end of vacuuming, he says, I’m going back to my base–and then he heads in the opposite direction from his base. He shortly turns around and goes in the right direction, but the algorithm or whatever it is that drives him doesn’t make sense to me. Again, I can let this go, because whatever he’s doing is working for him.

You have to tidy up. Before setting Neato loose, Matt and I do a quick run around the house to pick up anything that might be on the floor, like shoes or dog toys or cords. If I’m vacuuming myself, I do this as I go, just tossing things out of my way. Neato takes a little more planning or preparation.

Neato has gotten stuck. Before getting a robot vacuum, one of the complaints I heard was that they get stuck. Neato hasn’t gotten stuck yet under furniture, but he has gotten stuck a few times on cords and once on the laundry room rug. I’ve now coiled up cords so that he can cruise under them, or tucked them under furniture, so that they don’t interfere with Neato. The laundry room rug gets rolled up and set on top of the dryer until Neato is done.

He doesn’t do stairs or walls. My sister laughed at me the first time she came over after we got Neato because the floors upstairs and down were pristine and the stairs were a mess. Likewise, those pesky cobwebs that form in the corners of the ceiling aren’t on Neato’s radar at all. So I still have to drag out Sebo to handle a few other areas.

Price. Neato is not cheap. After investing as much as we did in Sebo, I was very reluctant to spend just as much on a second vacuum. 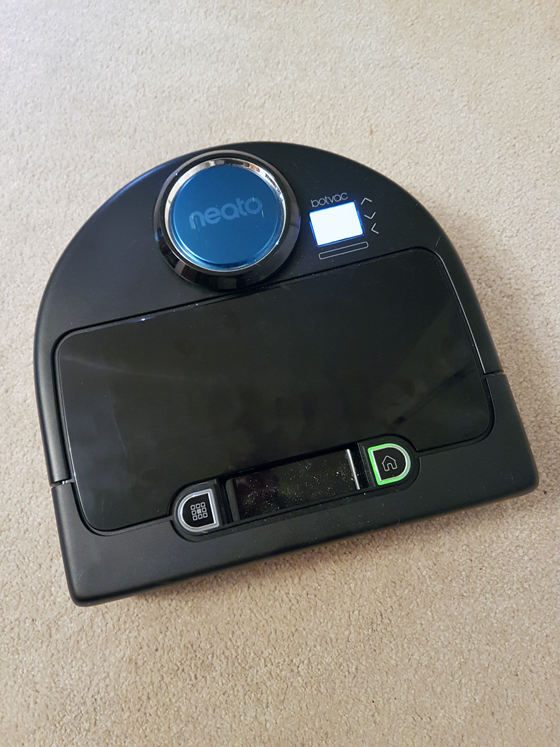 In the end, Neato has one benefit that outweighs everything. I don’t have to do the vacuuming anymore. That is a massive, magical win.

Who handles vacuuming at your house? Have you considered getting a robot vacuum? Does anyone else struggle with staying on top of the vacuuming? Or do you enjoy vacuuming?